Our first stop was the “Quiet Man Bridge,” where John Wayne and Maureen O’Hara played out the loves scenes in the movie. What an incredibly lovely place, full of sparkling water, sunshine, and of course, a tribute to John Wayne. As I stood on the bridge and gazed over the merry stream, I found myself thinking about Deirdre and Colin, the hero and heroine of one of my Claddagh Series stories, which is in the plotting stages. I pictured them wandering along the riverbank, hand in hand, getting to know each other and falling in love. (Of course, no good love story is without conflict, but that, too, is still in the plotting stages!) So naturally, a bridge that might look very similar to the “Quiet Man Bridge,” will appear in this story (tentatively titled, “My Lady, My Love”). 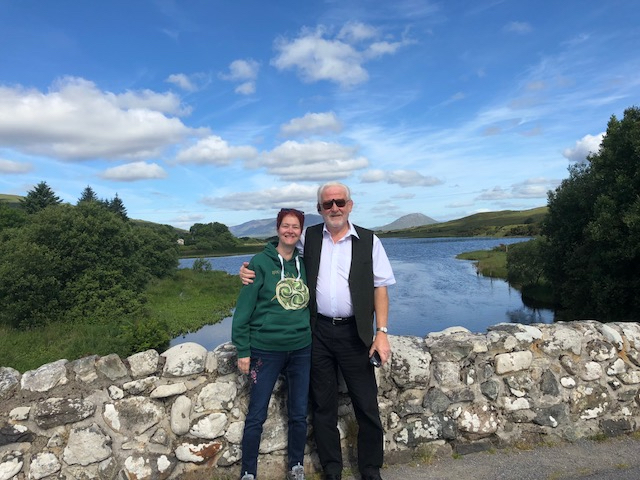 The author on The Quiet Man Bridge

Amazing inspiration, and it wasn’t even noon yet! And it got even better!

Our second stop was the Glengowla Silver and Lead Mine, a commemorative mine abandoned in 1865 and reopened as Ireland’s first show mine and museum. Guided tours take visitors on an underground tour of the winding tunnels where once determined me chiseled away at thick, stubborn rock in search of ore.

I’d never been in a mine before, and I must confess I was a little intimidated at the thought, as I’m a bit claustrophobic. But last year, after my Wild West Irish Signature Tour, I visited Newgrange, and thought if I didn’t have a panic attack in that small space, a mine should be a piece of cake. Besides, every experience is fodder for an author—who knows when I might decide to write a miner hero? So I donned hairnet and helmet, sucked in a deep—a very deep-- breath, and proceeded into the dark recesses of the earth.

It turned out to be an absolutely fascinating journey! Did you know that these miners—mostly survivors of an Gorta Mor—the Great Hunger—weren’t paid unless they found lead, the desired ore? No matter what else they found, if it wasn’t lead, they weren’t paid. Or that the timbers that shored up the mine were from American trees. This was because of the coffin ships that took desperate Famine refugees to America, and rather than return with empty holds, the ships brought back American timber instead.

When I came up from the mine, I felt a surge of pity for those long-ago miners. I looked up at the blue sky, felt the sun shine hot on my face, inhaled a breath of fresh ar, and I wondered. If the light and air felt this good to me after being down in that dark, dank mine, what must it have felt like to them? How could they bear to spend so much time in the bowels of the earth? Such sweet serenity must have seemed like a little bit of heaven to them.

I was soon glad to shake off such sober thoughts as we were given a highly entertaining demonstration of cutting the turf. I’d never seen in done before, except in a few YouTube videos, and I was eager to see this fast-dying art performed. I can’t reveal all the secrets of properly cutting this wonderfully aromatic fuel, but I will say it’s hard work. And I was able to record the entire process. Now, when I need one of my heroes to venture into the bog, I’ll know exactly what he does and how! More fodder for my already-bulging-after-my-tour research files! Lunch was taken at the lovely Brigit’s Garden, a unique garden nature and heritage trail that celebrates the four Celtic seasons: Samhain (Halloween and the beginning of winter), Imbolc (Spring), Bealtaine (Summer) and Lughnasa (the harvest, and the coming of autumn). The gardens are absolutely spectacular, and even more so is the Calendar Sundial, the largest sundial in Ireland, which tells not only the time of day, but also the month of the year. Again, excellent research for my Medieval/Fantasy series. The author in Brigit's Garden

I took a little time for a peek at the Fairy Fort. I didn’t take any pictures there—I wasn’t sure if it might be bad luck to try to photograph the fairies—but I’m almost sure I saw a quick, darting movement from the corner of my eye, and a tiny sparkle of light. Someone less fanciful than myself might say it was just a trick of the bright summer sunshine, but I’m not sure about that…

Derek took us home by yet another scenic route (is there any other kind in Ireland?), and as we drove along breathtaking coastal views and through fields filled with ancient, timeless stones, I found at least a dozen locations where I’d build my dream cottage. Just a small one, mind, by a merrily spluttering stream, built of some ancient stone, with a tidy thatched roof and a turf fire glowing red and orange on the hearth. Oh, and Internet access, and access to Amazon for a monthly book delivery.

Ah, well, an author can but dream…

From the Wild West of Ireland,

READ: A Spiritual Journey: Dispatches from The Wild West, Day #5

DISPATCHES FROM THE WILD WEST:

A Spiritual Journey: Dispatches from The Wild West, Day #5

Dispatches from the Wild West: Day #7

Dispatches from the Wild West: Day #8

Dispatches from the Wild West: Day #9