Dead Interesting- Stories from the Graveyards of Dublin The Irish book market is heavily saturated and books tend to have short shelf lives so it is often possible for good books to go unnoticed. I first heard about this book on the radio show Liveline, where the presenter, Joe Duffy was fascinated by the long forgotten about Seapoint Tragedy. In 1890 a mother and four of her children died from eating toxic mussels, a tragedy recalled in Ulysses by James Joyce.

Anyone interested in Irish history has to visit two places in Dublin- Kilmainham Jail and Glasnevin Cemetery. The latter provided the eternal resting place for Irish patriots such as Parnell, Collins and DeValera as well as other interesting figures such as the singer Luke Kelly, the writer Brendan Behan and Father Browne who took the last photos aboard the Titanic. Essentially Glasnevin is who is who of Dublin since it opened in 1832. In recalling our patriot dead the author does not forget the human cost. He recounts the tragedy of the Neilan brothers who fought on opposing sides during the Easter Rising and reminds the reader that one of the first casualties was a toddler Seán Foster, possibly shot by a relative.

The author, Shane MacThomáis is a tour guide and resident historian at Glasnevin. He is the son of the late Éamonn MacThomáis, a well known historian and republican. It is not his first book and he previously wrote “Glasnevin, Ireland’s Necropolis” available from The Glasnevin Trust. The book, with a foreword by Dr Peter Harbison, is small enough to carry around which can be handy when looking for graves. The chapters are highly detailed yet easy to digest and written by one used to telling a good story. They are also short enough to retain the reader’s interest and the necessary facts can be gleaned in few moments.

The book does not only cover Glasnevin but also other cemeteries of note such as Mount Jerome, Bully’s Acre, The Huguenot Cemetery and a little known Jewish cemetery in Fairview.

Like any book it is not without faults. On page seventy four there is a photo of the German spy Hermann Goertz but the caption refers to him as John Francis O’Reilly.  The book also caters largely for people who know their way around Dublin and in this regard it could be better. I am a great fan of Duncan J. D. Smiths “Only In” guide books of different European cities which gives very precise directions to the objects of interest and also mentions which other ones are nearby. Glasnevin is a large cemetery and I am sure some visitors would like to locate certain graves fast. Where directions to other cemeteries exist, they are somewhat vague. In spite of these minor shortcomings it is a valuable book to have. 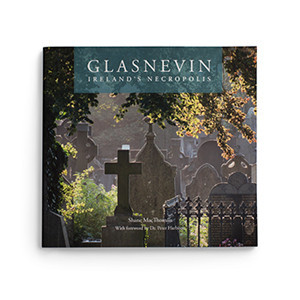 Comment by Jim Curley on July 18, 2013 at 12:43pm
When I visited Glasnevin in the early 19702, I was amazed at the line-up of groups outside the cemetery gates waiting to get inside to bury their dead. I visited some graves of the famous, but the only one I remember now is Matt Talbot. Is it near capacity now?

There is still space there. I thought Matt Talbot was buried in Sean McDermott street just off O'Connell Street? At least there is  a sign in a somewhat dodgey area advertising his tomb.

"Talbot's remains were removed from Glasnevin Cemetery to Our Lady of Lourdes church on Seán McDermott Street, Dublin, in 1972. The tomb has a glass panel through which the coffin may be seen."

Thanks Jim, I didn't know that. He was from the Monto area aka 'the den of sin' and died in 1925, the same time the Monto was 'cleansed'. Why they would move him is unclear.Maybe he was easy to venerate at a city centre location.