Corcoran: Part 1: From Bane to Toast of the Nation 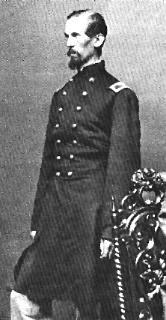 (Right: MOLLUS - Michael Corcoran in a pre-war photo, when he was a colonel.)

A policeman in Ireland, Michael Corcoran became a symbol of what an Irishman -- and a Fenian -- could make of himself in the New World. In Part 1 of this five part series, he generates a maelstrom of criticism in refusing to march his regiment for the visiting Prince of Wales.

"BY CORCORAN!" That old Irish saying, "What's bred in the bone will out," just may have great truth in it?

Let's see. ... Michael Corcoran was born on September 21, 1827, at Carrowkeel, Ballymote, County Sligo, Ireland. He was from old stock, a direct descendant of one of Ireland's immortals.

Michael's great grandfather, Patrick Thomas Corcoran of Sligo, married Mary Fitzgerald of Cloonmore, Roscommon. Mary was the great granddaughter of the Earl of Lucan. Mary and Patrick's grandson was Thomas Corcoran, a retired half-pay British army officer who had served in the West Indies for many years. Thomas married Mary McDonagh of Carrowkeel, Ballymote, Sligo. That union produced the celebrated military leader, Michael Corcoran. So, Michael Corcoran was the maternal great-great-great-great grandson of the renowned Patrick Sarsfield, Earl of Lucan.

Michael received a fair education which he augmented by reading widely and wisely. He joined the Royal Irish Constabulary when only 19,remained with them for three years, stationed at Creeslough, County Donegal. In Donegal, he was an on-scene witness to the horrors of the Great Famine. He was drawn by the Young Ireland Movement and resigned from the Constabulary in August 1848, returning to Carrowkeel.

Toward the end of the year, he sailed from the port of Sligo on a windjammer, bound for the distant shores of America. The trip which usually took two weeks, cost two pounds, with Michael providing his own food. He landed in New York City, facing and, in time, overcoming the many hardships and vicissitudes encountered by Irish emigrants before him.

Corcoran worked at a variety of jobs. For a time, he sold oysters on the Bowery, was a "policeman" for the Revenue Service and a clerk in the Post Office. Then he went to work for John Heeney, proprietor of "Hibernian Hall," one of the most popular meeting and gathering places for the Irish in the city. The Hall was also a meeting place for the Ancient Order of Hibernians. John T. Ridge in his history of the A.O.H. (Erin's Sons in America) wrote:

Nowhere was the connection between the AOH and the Irish military units more evident than in the city of New York, and the connection can be traced back to several years before the Civil War. It apparently began at the point in 1858 when the AOH started holding its meetings at Hibernian Hall, the long established meeting place at 42 Prince Street, opposite old St. Patrick's Cathedral.

At the 1858 AOH National Convention in Hibernian Hall, the then Captain, later Colonel, Michael Corcoran, Hibernian and veteran nationalist, came into the hall and was introduced as "their host. " Corcoran, while not the owner of the building, was manager of the hall, and when war broke out in 1861, the hall's doors were flung open as a recruiting depot for the 69th Regiment and, later, other Irish military units.

When New York's Irish Regiment, the 69th, marched to the front in April of 1861, they honored the AOH by parading past Hibernian Hall or "Irish Headquarters", as it was popularly known in the city. AOH members festooned the hall with patriotic colors and the national officers lined up to review the Irish soldiers, many of whom were members of the Order, as they passed by.

When John Heeney died, Corcoran became proprietor of the Hall. He later married Heeney's young widow, Elizabeth Heeney. Michael Corcoran, it could be said, went "public" when he joined the military, enlisting in the Sixty-Ninth Regiment as a private in 1851. With his passion for the military, and his knowledge of military tactics, Corcoran rose steadily through the ranks -- orderly sergeant, first lieutenant, captain. The "Quarantine Riots" on Staten Island in 1858 afforded Captain Corcoran an opportunity to show superiors his capacity for command responsibility. The division's commander lauded Corcoran's performance during the riots and described him as "one of the best officers in the militia. " In August 1859, he was promoted to fill a colonelcy vacancy in the regiment.

In his 1988 book on New York City's St. Patrick's Day Parades, historian Ridge gives a personal perspective on the next episode in Michael Corcoran's colorful career:

In the fall of 1860 the Prince of Wales made a grand tour of Canada and the United States. With so many exiles of famine and oppression in the city, the Prince's visit was hardly popular with the Irish. In New York there was, however, no shortage of Anglophiles and they decided to honor the Prince with a grand military parade and called out the local militia units, including the Irish 69th Regiment. The commander of the 69th was Michael Corcoran, an exile of the 1848 Rising in Ireland and a founder of the Fenian Brotherhood, a secret revolutionary society pledged to Ireland's liberation by force of arms. Corcoran felt it was an insult to both his adopted country to entertain the great grandson of George III and to his birthplace to pay homage to "his mother's son," the offspring of the detested Queen Victoria.

Corcoran issued a statement that he "could not in good conscience order out a regiment composed or Irish-born citizens to parade in honor of a sovereign under whose reign Ireland was made a desert and her sons forced into exile."

The fat was in the fire! Colonel Corcoran's action created a local sensation, which went nationwide. Corcoran was placed under arrest, preparatory to being tried by a court martial. There was bitter denunciation of his action and equally bitter support of it and denunciation of his detractors. Men often came to blows in arguments about the right or wrong of Corcoran's course. Letters and telegrams from many parts of the country, approving Corcoran's act, poured into New York.

This was a time when the echoes of the great wave of anti-Catholic and anti-Irish hatred and bigotry that had swept through the country could still be heard and felt. Many suspected the Irish of being so independent and authority resistant as to make poor soldiers. Some feared that the Irish would not do battle under commanders whose lineage they did not like.

Then came the firing upon Fort Sumter and a "Civil War" was forced upon a divided nation.

END OF PART I

About the Author: Flushing, N.Y., resident John J. Concannon,johncon@juno.com, is a former national historian of the Ancient Order of Hibernians. This series is derived from a monograph he wrote for the unveiling of a new gravestone for Michael Corcoran in 1990.