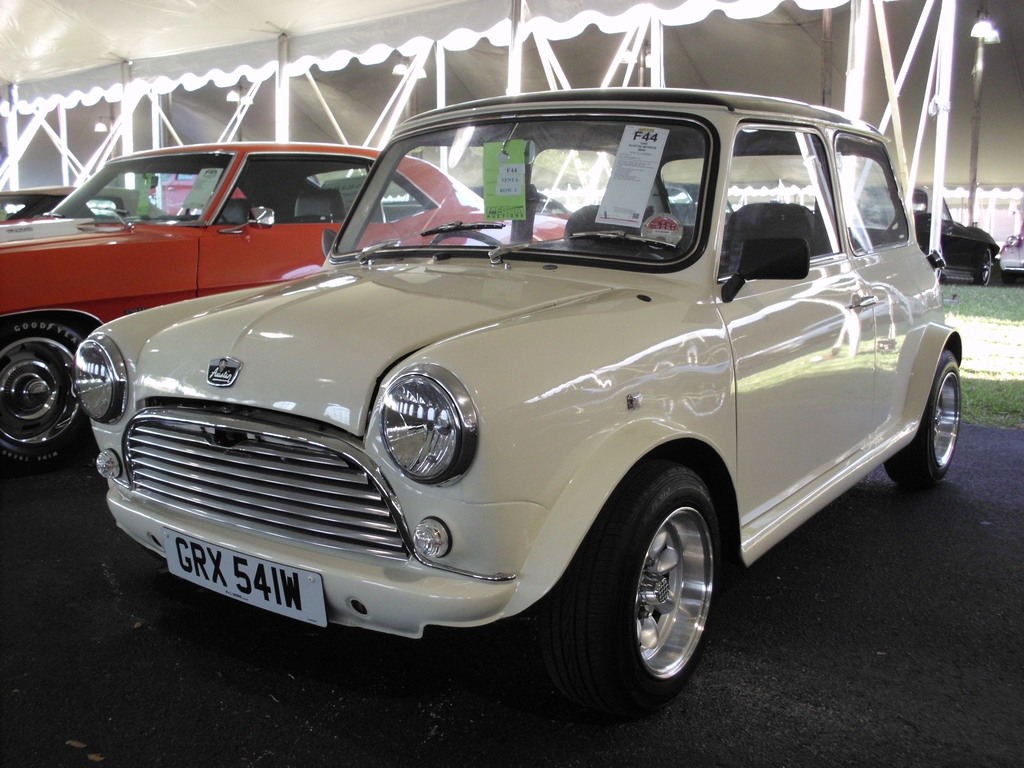 Easter in my childhood meant time off school, the prospect of cream filled chocolate Easter eggs and endless hours attending mandatory church services. But most of all it meant the Circuit of Ireland motor rally would pass our farmhouse.

Paddy Hopkirk was my hero in those days followed closely by Rosemary Smith.

Paddy raced many cars during his rallying career but will always be associated with the Mini Cooper.

Rosemary Smith drove a Hillman Imp (known in the United States as the Sunbeam Imp). The small rear-engined car never enjoyed the success of the Mini.

I listened to every sports broadcast on Radio Eireann for news of the Circuit of Ireland. For weeks before the event there would be news of who had entered, what they were driving and who was favored to win.

“Stay behind the wall,” my mother would warn me as I waited anxiously for the first rally car to appear on the day of the event. It was good advice. The sturdy stone wall in front of our farmhouse was certain to stop any out of control rally car.

It was quite frustrating waiting for the cars. Since you did not know the exact time they would appear you had to watch every ordinary car that drove by. The Ford, Hillman, Morris, Austin, Renault and Fiat family cars were of no interest. Anyway, they were driving too slowly.

The rally cars were not actually racing as they came by our house. They were driving between rally stages. The stages took place on public roads closed for the event. Ireland is one of the few countries that closes roads to allow motor competitions to take place.

Even though they were not actually racing when we saw them they tended to drive faster than other traffic. As well as the competitors there would be support vehicles and followers. It was easy to pick out the competing cars because they had rally numbers emblazoned on front, back and sides. They also had numerous sponsor decals, wonderful multi-colored paintwork and an array of fog and spot lights. The only downside was they would go by at high speed giving me little opportunity to take in all the details. Many of the follower’s cars were even more colorful and decked out than the rally cars. Where are they all now? Hopefully not all of them succumbed to the crusher.

The Circuit of Ireland was an important visual experience for me. My family did not yet have TV and we did not live near a movie theater. The only images I ever saw of my heroes were the real ones as they flashed by before my eyes. It was fascinating to see people and cars that had been in faraway places such as the South of France for the Monte Carlo Rally. This was my connection with the outside world.

Most of the adults thought it was a lot of crazy nonsense. They felt the rally drivers had more money than sense. Many people in our neighborhood did not own a car. It was difficult for them to understand how people would risk their lives in dangerous vehicles. People who lived in locations where the roads were closed for the competition had mixed feelings. They despised the inconvenience but enjoyed the spectacle.

My interest in car rallying ebbed and flowed throughout my life. There were times when I followed rallies across the countryside. I walked through rough fields and climbed over stone walls to attain a good vantage point. On other occasions alternative interests and commitments took precedence. On some occasions I actually found myself avoiding a rally route to get to my destination. Such is life.

In the 1960s rally drivers wore no protective clothing, the cars were similar in design to production models and the speeds were realistic. Nowadays the occupants wear mandatory protective helmets and clothing, the cars are specialized rally models and the speeds are extremely high. The rallying of my youth was a sport that relied to some degree on commercial support.  Now it is really, really big business. The stakes are high; sponsorship is necessary and winning is everything.

I guess my interest in rallying waned in the face of the vast commercialization of it all. I had a somewhat romantic or idealistic view of people scraping together sufficient funds to purchase a rally car, prepare it themselves and compete for the sheer pleasure of participating. I am not sure if it was ever like that for even the most laid-back competitors. It seemed every crew was connected to the motor trade. The pressure, commercialization and resulting competitiveness increased progressively over the years. There were not very many drivers and navigators out for a bit of fun.

Amid all the professionalism of modern day rallying there is one ray of light. At least it is such for me. They call it retro rallying and it involves people participating in restored rally cars from the past. This class is frequently included in serious rallies after the professionals have gone through. An increasing number of enthusiasts turn out to see the retro cars.

Yes, those guys are really doing it simply for the fun. They pay their own way, do their own repairs and have an absolute blast. This is a return to rallying roots. Such is the interest in retro rallying that special events are now held for the many enthusiasts who wish to participate.

Television coverage has been a mixed blessing to rallying. The exposure is good but the cameras tend to concentrate on accidents. (Accidents are an inevitable part of the sport.) These days one can boot up a computer and view endless compilations of rally crashes. Millions of people can click a computer key and view rally images before clicking onto something else.

Real rallying is experienced out in the remote countryside frequently combating the elements. The enthusiast derives his or her pleasure in observing an expert driver negotiating a particular section of a course with individual skill. The image does not have to be recorded on a still or motion recording device. It is recorded in the brain of the observer. Many times he or she is the only person to witness a particular maneuver, car control technique or tactic.

I have an overwhelming desire to attend a retro rally. I want to stand on some cold, misty heather-covered mountainside. I want to wait there patiently for the first Mini, Hillman or Escort Mexico to appear in the distance. I want to observe it fighting for traction on the damp roadway, stay on a roadway barely wider than itself and zoom past me in a long sweeping slide.

Not quite your cup of tea? I fully understand. You see, I am one of those people who feel an activity becomes diluted when too many people turn out to watch it. It loses its exclusivity, uniqueness and…..well, charm.

Yes, charm. Now that’s not a word one associates with any sport…certainly not motorsport. To me it recalls Paddy Hopkirk in his Mini Cooper, Rosemary Smith in her Hillman Imp, youthful times in rural Ireland and a time we think was simpler but really was not.

PJ, where did you grow up? The rally was largely in Ulster, no? (per a quick read about it on Wikipedia). Any great scenes from films set during the Circuit?

Gerry, I grew up in the Burren region of north County Clare near the village of Ballyvaughan. By the 1960s the Circuit of Ireland took in much of the island of Ireland. The route varied from one year to the next. I was fortunate that it came by my house several times. The nearby Corkscrew Hill and Ballyalaban mountain road have always been popular with the organizers of car events. The Galway Motor Club hold hill-climbs at both locations. Though not featured in any motorsport event the coastal road between Ballyvaughan and Lisdoonvarna is a wonderful drive and is part of the newly promoted Wild Atlantic Way. The status of the Circuit of Ireland has changed in recent years. There are lots of great U-Tube videos of the circuit - old and new. As well as the spectacle of the rally cars there are great views of parts of the countryside one does not always see. It is interesting to see what is in the background - farmhouses, forests, villages, etc. Sometimes one is amazed at the stupidity (I cannot think of a more suitable word) of some spectators who put themselves in harm's way and slow down the drivers.