One day during our just completed two-week vacation to Ireland my wife, Lindy, and I had another of those thoroughly enjoyable “only in Ireland” experiences that make traveling there such a joy. We stayed in a 200-year-old cottage in the little town of Ardfinnan (a subject for another day), just a little south of Cahir in southern County Tipperary, seeing parts of counties Kilkenny, Waterford, Cork and Limerick during our stay, as well.

On this particular day we traveled into Thurles, County Tipperary, and then out in the countryside a bit east of there to see the ruins of Kilcooley Abbey, a 900-plus-year-old Cistercian abbey close to the village of Gortnahoe. As is often the case with the more obscure religious sites in Ireland, finding it was not the easiest thing in the world, but in the Irish countryside getting there truly is often “half the fun." After a few wrong turns down a couple of lovely little (and very narrow) roads, we finally found it.

At least we thought we had found it, but all that was visible from where we parked the car was a more modern Church 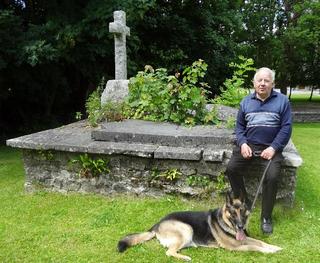 of Ireland building and some gravestones. From what I had read online though, I believed we were in the right place, so we started out in that direction. As we walked past the church, we were lucky enough to run into a gentleman named Phil (right), who was out walking his German Shepherd, Caesar. It turned out Phil was a font of knowledge on the family that had owned the now-abandoned “big house” that was visible off a ways through the woods and all the surrounding walled-in estate. The house had been built in 1790 by Sir William Barker. And, as is frequently the case with the Irish, Phil needed little prompting to regale us with the tale. The house and estate, by the way, were only abandoned in 2008, and it’s now for sale. The asking price is apparently somewhere over 2 million Euros. Lindy and I decided it was probably out of our price range, barring some lucky numbers in the lottery.

Though he appeared to be going in the other direction, when I asked him about the exact location of the abbey, Phil immediately volunteered himself (and Caesar as well) as unofficial “tour guides” of the abbey. Though Caesar appeared to be more interested in what might be found in the high grass in the field rather than the abbey itself, Phil proved to be as knowledgeable regarding the abbey as he had been about the Barkers. He also clearly enjoyed relating this information to us as much as we enjoyed hearing it. Several times Lindy and I exchanged glances and smiled, delighting in another enchanting bit of serendipity here in the land of our ancestors.

Kilcooley Abbey dates to around 1182, when Donal Mor O’Brien granted lands to the Cistercians for an abbey. The Cistercians were to have been thrown out by Henry VIII in 1540; however, the Butler family, who then owned the land it was on, allowed the monks to stay. Thus the Cistercians managed to maintain it until they were finally removed for good by Cromwell (who else?) in 1650.

The first thing you notice when you walk into the abbey is a lovely carved baptismal font (pictured) on its south wall. And on the wall opposite the font, as Phil told us, is the raised tomb, sometimes called a "tomb chest," of the knight Piers Fitz Oge Butler. It has a superb set of carvings around its sides. On top is a carved figure of Butler with a no-doubt, beloved dog poignantly lying at the feet of his departed master. There is a Latin inscription that translates to: 'Here lies, together with his parents, Pierce Fitz Oge Butler, who died on the feast of St Benedict, Abbot, A.D. 1526." Probably because the roof is still intact in this area, most of this tomb is in very good shape, though the knight's face has been damaged, perhaps long ago by a rival of the Butler's, as it appears to have been done intentionally. The dog at his feet is bearing its teeth, but apparently this was not enough to scare off this enemy. 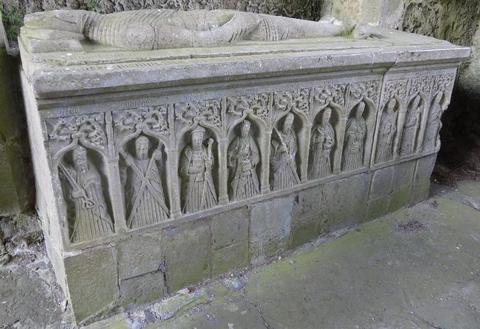 The carved figures around this tomb are some of the best we've seen in any of the numerous medieval religious sites we've visited in Ireland. On the front are the apostles Peter, Andrew, James the Pilgrim, John, Thomas, James the Lesser, Philip,Bartholomew, Simon and Thaddeus. They are thought to have been carved by Rory O'Tunney, who also sculpted figures at the nearby Jerpoint and Holy Cross Abbeys.

There is a wonderful carved archway (pictured) leading to the sacristy. Above and around the arch are several carvings that are still in magnificent condition, again because the roof has remained intact in this area. One of the carvings depicts a scene from the crucifixion of Mary and Saint John and another shows Saint Christopher crossing a river with the infant Jesus. There are also a pair of Butler shields. 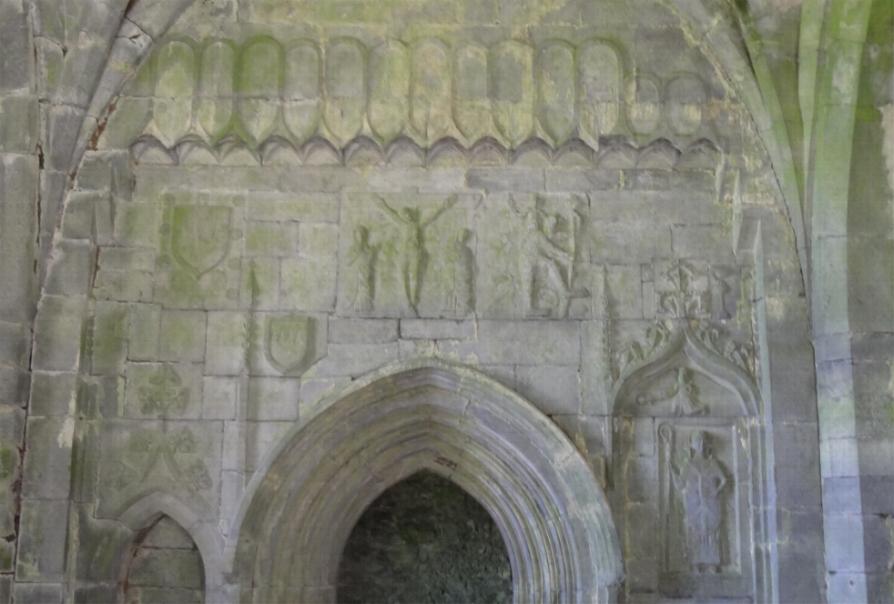 On the far side of the abbey, Phil pointed out two trees (one of them shown here) that he said botanists had estimated were as much as 1,000 years old, and whose exact type they were unable to determine. 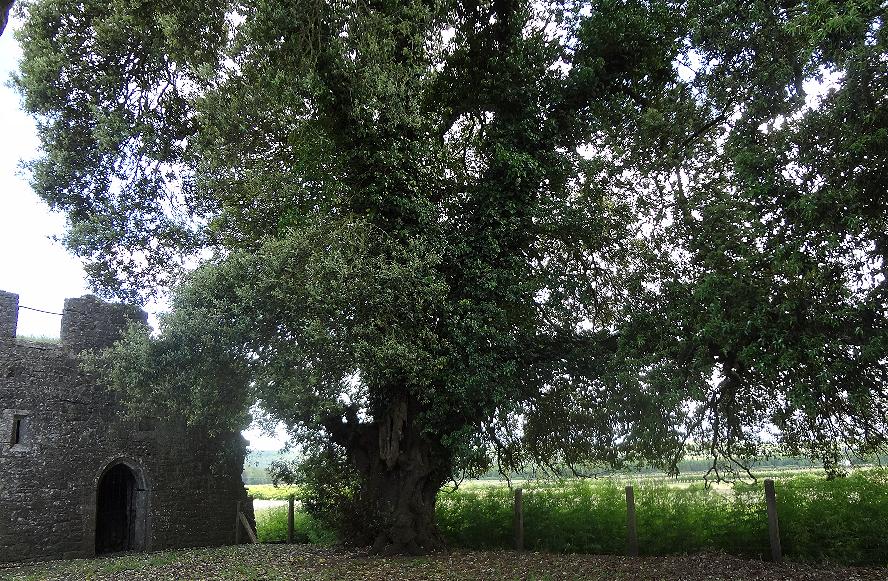 Usually we are alone in locations like this and use our little mini-tripod and timer on our camera to get a photo of the two of us together (with meself often stumbling over walls or rough ground to reach Lindy in time), but this time Phil was there to snap this one for us. We proceeded to head back to where our car was parked, with Caesar once again demonstrating for us his mastery of getting through the "cow gate" alongside the gate into the field, as he had on the way in. We said our good byes to Phil and Cesar with heart felt thank you's for them taking time out of their day to give us such an outstanding tour. Kilcooley Abbey itself is a fascinating monastic site and well worth the time it takes to locate it in the east Tipperary countryside. And if you happen to be lucky enough to arrive while Phil and Cesar are having their walk nearby, your time spent there will be twice as grand. And if that should happen, please tell them we said "Hi."

Wonderful history and photos! The Irish we all encounter on our holidays are just so warm and accommodating!!

Terrific story of adventure in finding Abbey and excellent descriptive commentary! The panels around the  tomb look amazing and rival those of the sister House, Jerpoint Abbey  Thank you for sharing as well and happy to hear you obviously enjoyed your vacation!

Comment by Michael Quane on July 14, 2015 at 8:58pm
Than you, Joe. Fascinating article. I missed this although I'm familiar with Holycross.