Childhood of 'The Troubles' 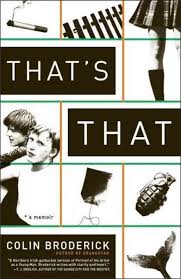 Review: "That’s That", by Colin Broderick
reviewed by Eamon Loingsigh

Innocently, children ask for things contrary to the idiosyncratic rules of adults.  When answered a flat “no” without explanation, a mysterious void can be felt in the mind.

Not as innocently, teenagers demand things they know are against rules. When a dictatorial “no” is again without explanation given, the resultant behavior is often hostile.

In the Irish writer Colin Broderick’s new memoir, That’s That, an entire childhood of black-and-white, bare-boned answers leads to the rage that all Catholics felt in the North of Ireland during the 1970s/1980s. The wounds run deep in the psyche of Broderick, who was born there the same year the Irish Civil Rights movement was crushed by the Royal Ulster Constabulary and British-Loyalist paramilitaries supporting the Protestants of the Northern counties.

The Troubles had begun, and Mr. Broderick’s childhood becomes the metaphor for the Catholic experience in the Northern counties during a time in Irish history riddled with segregation of peoples by faith and a bloody tit-for-tat war where one side was supported by a world power and the other by martyrs and rebels with a history filled with loss, starvation and invasion.

Mr. Broderick’s memoir is a kind of hot-tempered, Absurdist biography, one that may put you in mind of Frank McCourt, if he had written his memoir in his younger, more volatile years. Tension-filled scenes of despotic inequality are evoked in matter-of-fact prose, as the title suggests, saving more descriptive language for the opportune, climactic moments.

"That’s That" is Mr. Broderick’s second memoir. Like his first — "Orangutan" (2009) — it culls from his country’s literary, political and embattled history. Ireland’s first great “deceit,” he observes, is it’s beautifully lush green landscape, “buried beneath that verdant lawn is her pain; underneath, there is blood.”

By telling the story of one lad’s childhood in the North of Ireland during the era, Mr. Broderick is able to express the collective experience of the oppressed Catholic community during the most violent times in Ireland since the War of Independence and its Civil War of the 1920s. An often bloody era when Protestant minister Ian Paisley barbed on the streets of Belfast with Sinn Féin leader Gerry Adams, long before President Bill Clinton’s intervention and the subsequent Good Friday Agreement of 1998.

Mr. Broderick came of age in a farming town called Altamuskin, in the northern county of Tyrone (one of the six counties governed by Britain, though located in Ireland). Immersed in the stratified community, he refers to other Catholics of Tyrone in the old tradition of Northern Irish warriors as his “clan.” Lucky for the reader and the story, Mr. Broderick, although Catholic, was not of a family that actively fought. In this regard, the reader is given the perspective of one side of the Troubles without his being involved in the war (although he was tempted to join the IRA as a teen).

His “clan” grew up within mixed communities where only Catholics were stopped at checkpoints and amid widespread gerrymandering that benefited the Protestants and a law upheld by Ireland’s ancient enemy, Britain, which all too regularly sided with the Unionist Protestants.

“Protestants and Catholics lived alongside one another, but we remained very much apart... Even the Protestant farmers operated in a class all their own,” as they had all the most fertile soils in the North, while “the Catholic farmers had land on the sides of mountains and the middle of wet bog land.”

Broderick goes even farther, accurately describing the sectarian lives and deep divide between two groups that share the same community in the North of Ireland, “It was understood that the Catholics would support Catholic business and the Protestants would likewise stick to their own... Any sign of interaction with the opposing religion could be seen as a threat to local morale or even to the safety of local lives.”

The book’s story simmers throughout Broderick’s younger years, though the makings of its later boil is foreshadowed in repeated news reports of murders, assassinations and bombings that his father watches from the living room television in their home.

The division and obvious inequality felt in the Broderick household and by the Catholics of Northern Ireland is notable through these reports, such as that of the Catholic hunger strikers that starved to death in protest within the English prison Longkesh, “It was understood that each one of them had been sentenced by a court system that we as Catholics refused to recognize. The entire system was British-run. There was quite simply nothing just about the rule of law for a Catholic in the North of Ireland. The Brits were in the position of judge and jury.”

At bottom, Broderick’s story is about what happens to the psyche of a child when coming of age in a war zone where one group of people are treated as terrorists, the opposing the oppressor.

To add to his feeling of injustice and subjugation is his mother’s trenchant demands. As a boy, he accepts her flat commands without appeal, but as a young teenager he finds it enraging to be told “no,” and, like the laws of the foreign British police force and local Unionist Protestants, she doesn’t say why, only stating bluntly, “and that’s that.”

Toward his late teens, he looks to do what so many Irish man or woman has traditionally longed to do after turning legal age: Emigrate.

At eighteen, he becomes obsessed with leaving Ireland and eventually joins Irish squatters, in particular, the Tyrone clan in the North of London. For the first time in his life he is out from his mother’s autocracy and the tyranny of selective British law and check points, the threat of indiscriminate internment and the sectarian violence of the region.

Mr. Broderick is an appreciable writer. His prose is sensate and builds upon itself through experience. When describing his first drink (Mr. Broderick is a self-described alcoholic), “Before the first pint was drained I could feel its warm, slippery tentacles creeping up the walls of my insides and wrapping themselves around the pleasure zones in my brain and running at will throughout my body, caressing the very places where I had been hurting my entire life, throwing open the windows of my heart and letting the great breeze of possibility rush in. I knew right there and then that I would never stop.”

The book moves in chronological order, from birth to the age of twenty, and sweeps us into the dark, rainy, turbulent world of Northern Ireland during the Troubles. Several scenes, aptly enough, involve the many forms of oppression of the day. Whether it be his mother’s demand for order, a teacher’s yelping at him, the purity demanded by Irish Catholicism, the terrible weather, British law on Irish soil or even in-fighting between the Catholic clans of counties Tyrone and Armagh.

The natural resultant behavior is rage, which, for Mr. Broderick, comes in the form of fist-fighting and binge drinking.

Mr. Broderick is well-suited for the memoir, as he sticks closer to the realities of a Northern Ireland childhood rather than embellishing with a literary wand. Sticking strictly to his perspective of each situation in present-tense gives the reader a true feeling about his upbringing.

Yet, a reader can’t help but to wonder what his thoughts are as an adult now that he has had time to process his sectarian childhood.

When he is lucky enough to go and see a whale that has wandered under a bridge a few towns away, we find out how happy he was as a young boy to have seen such a spectacle. But his uncle, who drove him and a few other children there, is harassed and embarrassed at a British checkpoint on the way.

How does the author feel about this memory of his initially being confronted by the enemy, we don’t know. What does it have to do with the big picture of a childhood of Northern Ireland, we can only assume it as a debilitating, oppressive feeling.

David Shields says good memoirs use “the frame of nonfiction as a trampoline to bounce into really serious epistemological questions.” (from: http://www.oregonlive.com/books/index.ssf/2013/03/seattle_writer_da...)

Although Mr. Broderick often stumbles into the bigger questions of the psyche, his ability to acutely describe the experiences of growing up Catholic in Northern Ireland during the Troubles are revealing and begs the world take notice of all people that live under dictatorial regimes or occupation.

Yet Mr. Broderick’s use of culminated experiences to reach a corporeal and kinesthetic conclusion with selective personal expositions, gives the reader a full-bodied exposure to a childhood filled with sectarian violence and war.

Eamon Loingsigh’s historical novel "Light of the Diddicoy", about the Brooklyn, Irish-American White Hand Gang is due out St. Patrick’s Day 2014. Visit http://artofneed.wordpress.com to learn more.

'That's That': Colin Broderick Discusses Being a Kid Amid 'The Trou...

My gratitude and admiration to you, Eamon, and to you, Colin, for inspiring such a commanding, insightful journey through Colin's memoir. Bravissimo!

Another to add to the growing list of books I must have and read... Also adding "Orangutan" ... It is becoming clear that the answer to "what would you take with you to a deserted island if you could only take three things?" would be ...

A sea trunk full of books on my list

a Bottle of Jameson

After all...I can chop the trunk up into slats to build a raft...and the glass from a Jemmie bottle would make a great signal reflector and a fire starting tool... the books would keep me in good company

Just purchased on iBooks !!!  Can't wait to read it.

Thanks for the great review.

Thank you so much, all of you! Glad to hear of a purchase.

It's a good read, I promise. Very smooth and full of interesting insights and relations to important events.

I bought 'That's That' via the Internet about three months ago, and literally couldn't put it down until I had read the last page. A riveting story, highly recommended.