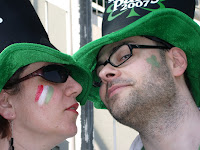 Italian writer and editor Massimiliano Roveri is driven, and, in a sense, adrift, as a storyteller who has found himself 1,300 miles from Ireland, the country that inspires him most. Roveri, 43, based in the central Italian province of Tuscany, has written two novels set in Ireland, and is working on a third. He uses the nom de plume “Max O’Rover,” and is the editor-in-chief of the three-year-old Irish-Italian cultural webzine, Italish, at www.italish.eu. He works with a team of five, abetted by perhaps not-so-silent partners, he says ­- “Irish people in Italy … pub friends.”

In a Skype chat last week, the playful Roveri, who makes his living as a logistics manager for a local company, brought The Wild Geese’s Gerry Regan up to date on Italish’s and his own exploration of Irish culture. It quickly became clear that ‘O’Rover,’ despite speaking English as a second language, finds among his muses Joycean word-play and the literary sensibilities of writers Martin McDonagh and Roddy Doyle. WG

The Wild Geese: Max, where are you located, and how did you come to be so smitten with Irish culture?

Max O’Rover: I'm located in Italy, and Ireland has been a thunderbolt. I was there first in 1999 (honeymoon) and I felt myself at home there. So I started to, quoting Ray Bradbury, "study" the Irish people, their culture, their music. Year by year we have been many times to Ireland. I wrote two books about Ireland and ... well, tons of posts on Italish.

The Wild Geese: What drew you to Ireland for that fateful honeymoon, and, by the way, does your wife share your fascination with Ireland? O’Rover: Books did, for sure, the mythology of the Celts. We wanted to see where the adventures of Cu Chulainn, Fionn Mc Cool, Queen Medbh were set. And, yes, I'm lucky that my wife, Mary Grace, shares with me this huge passion, though a bit less when we are on the Irish hills on bikes. (When they tell you Ireland is flat, well: they lie!)

The Wild Geese: Is Mary Grace Italian? And where in Italy are you writing from, where are you and Italish based?

O’Rover: Yes, Mary Grace is Italian, just like me. We are based in Livorno, Tuscany. The Wild Geese: When did you decide to establish Italish, and how did you come on the name? 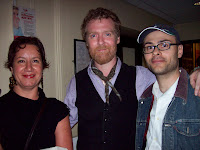 O’Rover: After I wrote my two books, we set a nonprofit company trying to self-publish. But there are so many competitors and, in the end, it was bringing me far from my personal objective: To tell Irish stories. So, from Querci & Roberson (my nonprofit company name, inspired by surnames of alter egos in the books) italish.eu started out. Italish is a melting pot of "things" from Ireland and Italy, so it is Italian and Irish: Italish! Our site has been online since 2010, and it's growing up. Slowly, but we are very proud of it.

The Wild Geese: You've mentioned your books a few times, Max. Tell us about them -- what are their titles, what are they about, are they available in English, and how and where can be acquired? O’Rover: I use an aka. Ok, don't laugh - Max O'Rover. The novels are set in Dublin, right now they are only in Italian, and soon they will be sold as e-books. Max O'Rover writes also a bit in English: You can find a full synopsis of my first book "The Day We Met Roddy Doyle" on italish.eu, with a couple of short stories in English, at http://italish.eu/news/how-the-irish-rediscovered-the-solstice/ , http://italish.eu/news/when-the-devil-comes-to-inis-mor-2/ The synopsis is here: http://italish.eu/news/the-day-we-met-roddy-doyle-by-max-orover-wit... .

The Wild Geese: These are fiction, I gather. How does your background, your childhood and education, color the Irish settings of your fiction?

O’Rover: A hint about the second book - it’s set during the Christmas holidays: Carabiniere Cesare Petralìa is in Dublin with his wife Serena, invited by his friend and colleague Brian Browne, Garda inspector.  But just a few hours after landing, Cesare gets involved in a murder case. In a cold and dazzling Dublin, stories of ordinary men and women clash in a struggle that seems without hope, against an untouchable power elite and the Dublin mob. The books have also Italian characters. The big challenge is to give strength to the Irish characters, and I'm very proud when Irish people living in Italy told me that [these characters] are ... Irish enough. ;-) I'm very interested in Ireland’s changes: I arrived there with the ‘Celtic Tiger’ at its start, I've seen it die. ... What I tried to understand, while writing, was what was happening to Irish people in this strange period of their history and try to understand how they feel. 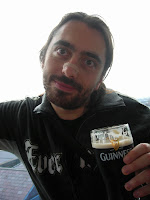 The Wild Geese: I gather Italish reflects your passion for all things Irish. What do you most admire about the Irish? Are there any aspects of Irish culture that you find undesirable or unflattering?

O’Rover: I love the "conversationalism" of Irish people. Their empathy. And, of course, I, we, absolutely love their literary culture. Something undesirable? Of course, it can't be that everything is OK. But the problems are the same everywhere. … I hope they are not so racist as Garda Sergeant Gerry Boyle- Brendan Gleeson’s character in John Michael McDonagh's black comedy "The Guard." ;-)

The Wild Geese: Who helps you with Italish, what's the names of the Italish team? And does the team include any Irish individuals, presumably Italian-speaking? O’Rover: Max and MaG [Mary Grace] for posts. Francesco "Palla" Pallanti is in command of IT: He is a great friend and an awesome partner, with expertise in web and social marketing. We have a couple of new colleagues: Camilla Foglieri as editor in Italy and Liam O'Broin in Dublin. And, of course, Irish people in Italy. Pub friends ... ;-)

Geese: What Irish culture can be accessed live in Italy? Have you set out to identify and ultimately highlight Italian ties to Ireland? O’Rover: It's very easy to do with music, and tourism. Everybody knows U2, and Italians … like Ireland. What we are doing for readers is helping … give their Irish experiences depth. Wild Geese: Have you explored the experiences of the Irish in Italy within Italish's pages? Hugh O'Neill in Rome, for example, and James Joyce. There must be many more examples, I'd imagine. [Wikipedia article on Irish expatriates in Italy.] O’Rover: We'd love to do that, but in this we are just starting. And help from Irish people livingin Italy would be very appreciated. 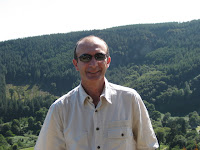 The Wild Geese: And finally, then, when Ireland plays Italy in football, whom do you guys root for?

O’Rover: Interesting question. ... MaG shouts for Italy, me for Ireland. The Wild Geese: We like to ask the hard questions!

O’Rover: But for me "the" sport is rugby.