Understanding the Significance of Celtic Symbols These Framed Tiny Tiles are new in stock, and I just love them. The colour combination is a beautiful variety of green and brown colours, which have been inspired by the typical shades of an Irish forest. The different Celtic designs intrigue me, and as there are a few Celtic symbols in this frame that I hadn’t heard of before, it prompted me to do a little research. If anyone has any further details on this I would be very interested to hear some more as ancient Ireland holds so many secrets.

The various Celtic designs were very powerful symbols for so much of the way of life of the ancient Celts, including meaning of life, religion, love, wisdom, and war. Some of the symbols predate Celtic times and would have been used, or variations would have been used, in a number of different countries and religions.

The Celtic designs symbolise significant meaning, and the more ancient symbols would have been used or adapted as part of the language of the time, particularly for the Druids.

The ancient Celts believed in the eternal spiritual life and the relationship with the divine and with nature. That the most important things in life came in sets of three and various Celtic symbols represent sets such as air, fire and water; land, sea and sky; maiden, motherhood and matriarch.

Take advantage of a 15% discount code for TheWildGeese.irish members -- at checkout use code tig15%wg (No expiry date, valid sitewide except on sale items, cannot be used in conjunction with any other discount code.)

Here we have provided a brief guide to these tiny tiles and the meaning of the Celtic symbols, Also referred to as the High Cross, the Irish Cross and the Cross of Iona.  The Celtic Cross is traditionally a Christian Latin cross with a circle around the centre arms. The circle and cross combination symbolises the harmony and stability of powerful divine energies of a solar life source.

The circular shape was an important pagan symbol. Incorporating this pagan circle on the cross helped to convert pagans to Christianity -- indeed, some believe the idea was first conceived by St. Patrick in an effort to convert the Druids. The ancient Celtic dragon was a symbol of wisdom, fertility and immortality. Celts believed dragons were wingless creatures like worms or water-serpents. Representing the untamed forces of nature, dragons were very powerful and the symbol of the chieftain, the Celtic word for which is ‘pendragon.’

Christians saw the dragon as representing chaotic natural disasters and evil, and they regarded the Druids as devil worshippers. St. Patrick drove the serpents out of Ireland -- some suggest this represents a religious conflict between Christianity and Paganism, ‘serpents’ being the Pagan way of life. This Celtic design symbolises unity of the body, mind and soul -- physical, mental and spiritual. The triquetra can also represent the past, present and future. In the Christian faith, the three points of this design represent the Holy Trinity, i.e., Father, Son and Holy Spirit. 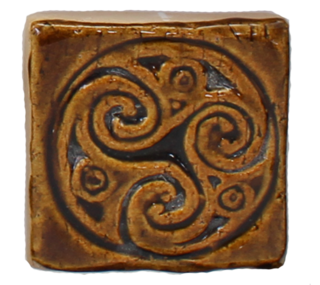 The Triskelion is also known as the Triskele. This design symbolises the unity of the three: eternal life, flow of nature and spiritual growth and also land, sea and sky.

This symbol can be found on the amazing historic site of Newgrange, which dates back to Neolithic times, proving this symbol is more than 5,000 years old. This spiral appears in many Celtic designs and ancient Celtic art. The spiral is believed to be an ancient symbol of even pre-Celtic times and can be found carved on pre-Celtic stone monuments.

The Triple Spiral design signifies the spiral of life, i.e., birth, death, rebirth. The spiral shows the continuity and cycle of life. The double spiral is frequently found in stone carvings and signifies the combination of nature and balance. The Celtic Love Knot is also known as Eternity Knot or Round Knot. The design of this Celtic knot is complete interlaced loops that have no start or finish and so is everlasting. The Love knot represents faith, friendship and love between two people, where the knot crosses it symbolises the unity and wisdom of the couple.

It is thought the Celts exchanged these Love Knots to proclaim their devotion, just as rings are exchanged now. The ancient Celts believed this knotwork had powers of protection. This shield knot would have been marked on the shields of warriors to protect them in battle. It was also placed on children’s clothes to keep them safe from danger. This knot was also used when people were sick, to ward off the evil spirits who brought illness.

The four corners of this knot are thought to represent the four gods who protect the people of the earth and who bring us the four seasons and the four elements of earth, water, fire and sky. The Dara knot is derived from the Irish word ‘doire,’ meaning oak tree, and this design represents the deep root system of the oak tree and in turn our own source of deep inner strength. The trees were sacred to the Celts, especially the Druids, who felt the trees embodied life and had spiritual powers and wisdom. They considered the oak tree to be the king of the trees. the tree of life, with an impressive root system, as such the Dara knot symbolises wisdom, stability and endurance. 15% discount code for TheWildGeese.irish members - at checkout use code tig15%wg

(No expiry date, valid sitewide except on sale items, cannot be used in conjunction with any other discount code.)

Comment by Jack Healey on August 5, 2018 at 10:28am
People often have one of these symbols tattooed on themselves, not knowing the significance/meaning behind them. I never knew the meanings myself until now. Thanks for sharing this. Does the print narrative come with the tile package?

Heritage Partner Comment by Totally Irish Gifts on August 5, 2018 at 11:34am
Thank you Jack. On the back of the frame the supplier has put the following information:

"For centuries, Celtic symbols and signs held incredible power for the ancient Celts in every way of life.

The Celtic Cross associated with Celtic Christianity although it has older, pre-Christian origins. The cross is a meeting of divine, universal energies. It represents the harmony and stability of powerful, sacred energies both seen and unseen in our universe.

The Triquetra interlaced with circle is seen as the Christian Trinitarian symbol (a Trinity knot). According to the Celts, the most important things in the world came in threes, three domains (earth, sea, and sky), three elements, three stages of life etc. It is also possible that the Triquetra signified the lunar and solar phases.

The shield knot, found on shields of warriors, children’s clothes, the ancient Celts also believed that the knotwork can protect the sick.

The Dara knot, the name Dara comes from the Irish word ‘doire’, which means oak tree. The trees were sacred to the Celts (especially the Druids). The oak was considered to be the king of the trees, revered for its longevity. It is the tree of life, with an impressive root system and leaves that reach the sky."