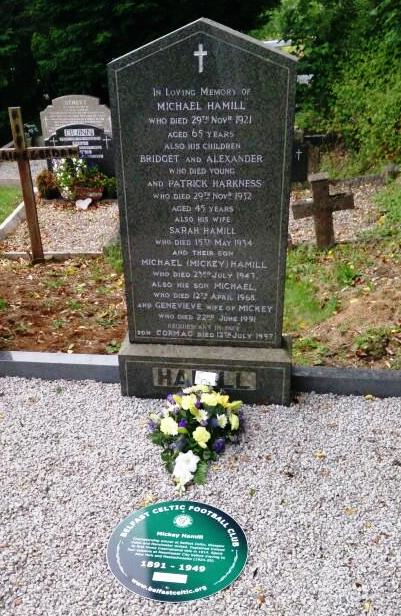 In a picture-postcard graveyard clinging  to the side of the Black Mountain in Belfast, the memory of Belfast Celtic’s  greatest ever player was recalled on June 30, 2012.

Mickey Hamill, the former Glasgow and  Belfast Celtic centre-half, who also played at other times for Manchester United and Manchester City, was commemorated at a joint event between the Belfast Celtic Society and the Celtic Graves Society.

In an emotional ceremony, Celtic FC  Director Brian Wilson gave the keynote address and spoke in powerful tones about the links between the two clubs and the importance of the Irish  connections at Celtic today.

He said; "It's a great privilege to  represent Celtic at this special event - It shows the special affinity between  the two cities of Belfast and Glasgow”. Mr Wilson further remarked that “Celtic FC supports and  values the work of the Belfast Celtic Society and the Celtic Graves Society”.

Celtic fans, veteran journalists and  family members of Mickey Hamill, from as far away as Australia, took part in the gathering. You can read more about Mickey Hamill and the Grand Old Team on the Belfast Celtic website. BC