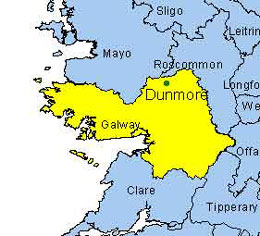 Carrowntryla House was one of the ‘Big Houses’ in Dunmore, County Galway and is a place of personal interest to me as it was in this house that my grandmother was born in 1915. Her father, a former RIC constable, was the caretaker there until 1928. It is not known for certain where the name comes from. In its corrupt English form it appears to have several spelling variations. Carrown is a corruption of Ceathrú meaning quarther and Tryla possibly comes from traonach meaning corncrake, a bird which the like the Irish language is no longer native to the area.

The house was first owned by the Catholic Burkes, who drummed up support for King James at Aughrim, which did them few favours. In 1753 they had to sell and the house passed into the possession of the Henry family in the 1770s. Their only daughter, Anne married William Hancock, son of Reverend Elias Handcock of Cavan in 1802. The Handcocks, originally from Devon had been in Ireland since the 14th century but had hitherto stayed east of the Shannon.

Their son William Henry Handcock, against his parents’ wishes, married Catherine Josephine Kelly in 1824. The estate at the time had an income of £4,000 per annum. She was considered a great beauty and the couple had three daughters Josephine, Anne Mary and Honoria. Josephine kept a diary and described the grandeur of the time with the family dividing their time between Dublin, London and Paris, receiving visitors such as the Lord Lieutenant. Her diary entries made fond references to her father but she wrote less affectionately of her mother. Handcock accused his wife of having an affair and they separated in 1841. His wife had visited Portumna Castle, home of Ulick John de Burgh, the Earl of Clanricarde (1802-74) and absentee landlord, ambassador to Russia and later Postmaster General.

In 1841 she gave birth to a boy whom she called John Delacour and was passed from relative to relative, believing he was an orphan. Handcock went to France and when he became sick was treated by Clanricarde’s physician. Before he died in 1843 he was encouraged by Clanricarde, who appeared to be trying to reconcile the family, to change his will making Catherine guardian of three daughters who would inherit Carrowntryla. Catherine took the girls to Paris but they returned to Carrowntryla during the turmoil of the 1848 unrest. Though left financially well off by her late husband Catherine was wont to complain of how poor she was and neglected the girls to the extent that they had neither proper food nor clothes and led lives of misery. By contrast when Delacour came to visit he was indulged and both she and her son seemed to despise the three girls. Josephine made a will, drawn by Lord Clanricarde bequeathing £10,000 to her mother in the event of her sister's marrying, but giving the whole estates to her mother if Honoria should die without leaving any children. Josephine died in 1849 and Anne Mary in 1851.They may have died of TB, induced undoubtedly by the poor living conditions mother had enforced on them. It was said and is still said to this day, that they were murdered when their mother laced the daughter’s dancing slippers with arsenic. Arsenic kills slowly and is hard to detect. In an 1855 article from The New York Times entitled ‘Another Romance in Irish High Life’ the mother, who died in 1853, was portrayed as a cruel villain who had treated her daughters most inhumanely stating that “greater cruelty was never exercised by a gaoler in the worst of times that this unnatural mother displayed towards her daughters”. The article summed up by saying that ‘the death of her children seemed to be the object of her life’. Indeed some commentators suggested the marriage in 1824 was part of an elaborate scheme between herself and Clanricarde with a view to getting the estate.

Honoria died nine months later without leaving a will. The eleven year old Delacour became beneficiary of the estate. The claim was challenged by William’s brother, John Stratford Hancock who argued that an illegitimate son had no inheritance rights. The matter came to court and attracted considerable media attention both nationally and internationally. The case went on for two weeks and Clanricarde though distancing himself from the proceedings used his influence to get a compromise. It was decided that, though Carrowntryla would remain with the Handcocks, Delacour would have to be compensated to the sum of £20,000. It was a massive sum and had Handcock had to mortgage the estate to finance it. Clanrickard denied Delacour was his son and also played down his dealings with the Handcocks in general. He claimed that he was in Russia when Delacour was conceived. Josephine’s diary was produced which placed him at Portumna Castle in 1840 when her mother was said to have visited. Delacour squandered most of his inheritance on gambling, served with the 11th Hussars was a close friend of Randolph Churchill. The writer Hannah Lynch (1862-1904) a close friend of Douglas Hyde and Fanny Parnell spent time at Carrowntryla as a governess. Her first novel "Through Troubled Waters" (1885, reprinted 2011), was a thinly fictionalised account of the Handcocks, in today’s parlance a ‘tell all account ‘of what life was like there. Critics described the plot as unpleasant but not without merit. A contemporary review of the book in The Spectator was critical of the horror aspect of the novel and had the following to say:

"The woman who poisons her daughters to secure the inheritance for her son is a monstrous creation which might very well have been dispensed with."

Very few original copies survived as both the Handcocks and Clanricarde bought and burnt them. By the 1870s the estate would have reached its zenith and consisted of 9,500 acres. The Handcocks also owned a considerable amount of land in Tuam and leased the land where the Cathedral now stands for a shilling a year. Times were changing in Ireland however and when Land War started in 1879 the tenants sought to buy the land which they farmed. A considerable part of the estate was sold off to cover debts. By the 1880s the Handcock’s children were resettling to The US, particularly Sundance Wyoming and Canada. The Land Commission tried to buy the estate but were out were outbid by Sir Henry Lopes and Mr Fitzwilliam Hume Dick. On the death of the latter his nephew and heir Captain Quintin Hume Dick (1849-1923) bought out the other mortgage and in 1897 went to live there. He was still living there in 1906 and the property was still in his name in 1910. The only occupant of the house however according to the 1911 census was 65 year old Daniel Kilcommons. Patrick Burke also 65 was listed as the gatekeeper. The Land Commission finally took over the estate in 1914. My great grandfather, John Deneny, was by this stage living and working there as the caretaker.

The Handcock of whom my grandmother always spoke was Major Gerald Carlile Stratford Handcock (1858-1938). His portrait once hung at the Museum in Galway but has since been removed. He served in the Princess of Wales's Own Yorkshire Regiment also known as The Green Howards. The regiment fought in the Maadi campaign in the Sudan, on the North West Frontier in India and in the Boer War in South Africa. Handcock was also a collector of antiquities gathered while stationed in Egypt in the 1880s and he sold a collection of Cypriot lead and selenite curse tablets to The British Museum in 1891. His niece, Evelyn Handcock Ferguson would later sell a large number of ancient Cypriot items in 1940 to The National Museum in Dublin. He was the last of the Handcocks to live at Carrowntryla when he moved from Athlone back to the ancestral home in 1928 and managed to acquire a hundred acres. He died in 1938 and was buried with his parents in the Augustinian Friary in the centre of Dunmore where the tomb still remains. His niece, a Mrs Voss inherited the house. Trying to run a house of what is believed to have been fifty rooms would have cost a considerable amount. Rates on such houses at the time were high and though such houses would today be considered tourist attractions and part of our heritage they were poorly regarded at the time and considered unwanted remnants of our colonial past. She sold the house to a Galway developer Hector McDonnell. The contents of the house were auctioned off, the man-made lake drained, the old trees felled and today not a single stone of the house remains. The orchard wall was saved from demolition and it contains an archway believed to have been taken from an ancient wall in Tuam. The closed family crypt where the unfortunate girls found their final resting place was left intact and today serves as a reminder to greed and cruelty.

Great post! I enjoyed being a part of the Carrowntryla history through your writings...

It should be noted that there are several spellings for 'Carrowntrylla'. It was interesting to go through the 1901 and 1911 census, both of which are online and which I recommend to anyone wishing to trace their ancestors. Another census, from 1926, delayed due to the Civil War and the first one of the Free State, is not available to the general public as it falls under the 'hundred year rule'.

My apologies for not putting up photos but I will endeavour to do so within the coming months.