Creevykeel Court Tomb is made up of a long, trapeze shaped cairn which encloses an oval court, and a burial chamber that is made up of two compartments at the north west of the court. In the back of cairn there are three subsidiary chambers which are built into the cairn. Creevykeel's earliest parts date from the Late Neolithic (c. 2500 BC). The old name for Creevykeel is Caiseal a' Bhaoisgin, the Fort of Bhaoisgin, Bhaoisgin being the well near the cairn.

It was excavated between July 25 and September 4 1935 by the fourth Harvard archaeological mission, as part of the first scientific excavations in Ireland, and led by Hugh Hencken O'Neill. Twenty seven workers were involved in the dig, and the cairn material was removed entirely and then replaced.

They found that the large structural chunks of sandstone are resting on the old ground surface, rather than placed in sockets. The excavation, dis-assembly and reassembly uncovered some interesting finds. These finds dated back to the original neolithic use and the early Christian period. Within the main chambers were four pits which had deposits of cremated bone - too few and fragmentary to say if they were a burial. A piece of worked flint was found in one of the pits. Between the dividing stones that seperate the large chamber,a polished stone axe was found. Other finds  included a large flint knife, arrowheads, pot sherds, some quartz crystals, and more flint scrapers.

In my lead-in Photo,which looks from the center of the court into the entrance of the megalithic chamber, you can see a smelting pit, the stones in the foreground, which are the remains of the Iron age or early Christian smelting pit. A smelting pit was where metal was worked. This addition would have been added perhaps 4,000 years after the original construction of the monument. The Iron age and early Christian metalworkers appear to have liked working in ancient sites and unusual places such as megaliths and crannogs, and megalithic sites seem to have perhaps held magical properties in relation to metalwork. 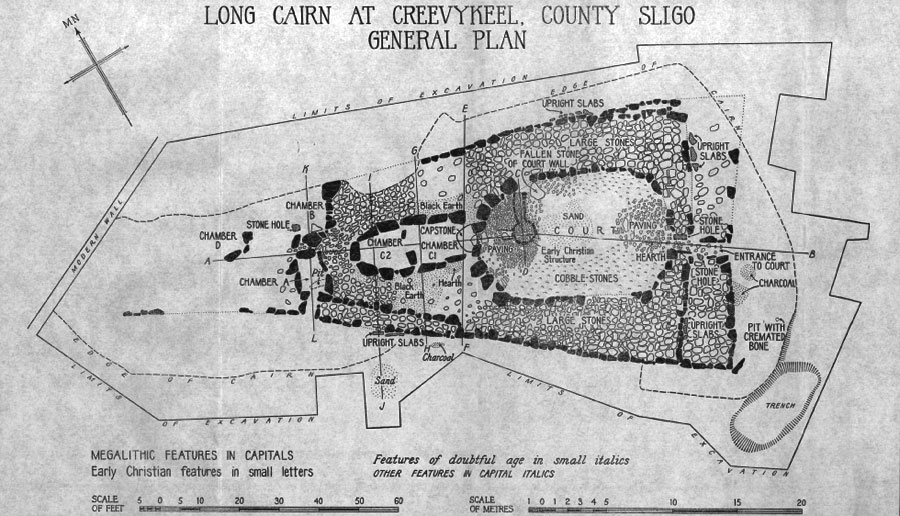 ~ Hugh Hencken O'Neill's plan of the main chamber at Creevykeel ~ 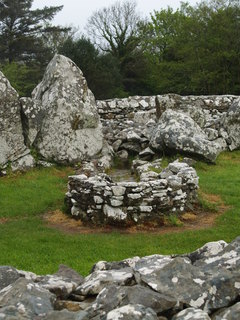 The standing stones around the court are quite massive chunks of local sandstone studded with pieces of quartz. They get larger approaching the opening at the rear of the court, which gives access to an inner chamber, now roofless but which was originally covered with massive corbels, making an artificial cave. At the end of the chamber is a large slab. There are three smaller chambers at the western end of the monument, two on the north side and one on the south side. The smaller chambers are thought to be a burial gallery of sorts.

In Wakeman's 1880 illustration of Creevykeel, below, you can see the entrance lintel standing upright over the doorway, creating a very imposing facade. By the time Hugh Hencken O'Neill and his team arrived, the stone had fallen into the chamber, and he replaced the stone, but put it back in a horizontal position.

Creevykeel can be found outside of Cliffoney, Co Sligo at the foothills of Tievebaun Mountain. It is one of the easiest sites to visit, as it is right by the Sligo - Donegal N16 road, 1.5 km north of the village of Cliffoney and over the road from Gorevan's pub. There is a parking space signposted, but it is easy to miss. Fantastic!  Thank you for this post..i just tweeted and pinned and posted on fb wonderful!

I wish I could conjure up the photos I took of another court tomb site in the wilds of Donegal. I spent two hours photograph it with only a large flock of sheep  with which to converse. The photos all looked grand on my camera, all uploaded fine to my portable drive and were present each time I showed them during that day... The next morning I awoke and only one was any where to be found... Faeries and their pranks...

Thanks for highlighting this spot... it's in great condition!