One thousand years ago tomorrow, on April 23rd 1014, Ireland's High King, Brian Boru of Thomond (Munster) fought and won his most famous battle against the Viking invaders at Clontarf in Dublin. His army, of several thousand warriors, though outnumbered, had fought and beaten, Vikings from Dublin, The Isle of Man, and, also several thousand Leinster men. The battle had raged all day, with skirmishes in places like Phibsborough, Drumcondra and Marino. At the end of the day Brian had retired to his tent to rest and pray, and whilst there, a Viking leader from the Isle of Man called Brodir, discovered Brian and killed him with his battle axe. Brian Boru had ruled Ireland as High King from 1002 until his death in Clontarf in 1014, from his palace at Kincora (now Killaloe, Co. Clare). During his life he had fought many battles against the Viking raiders, who for two hundred years had terrorised the Irish population with constant raiding and pillaging of the Irish people's goods and property. The Vikings then had got a foothold in Dubh Linn (Black Pool, now Dublin). Brian had arranged marriage alliances between his people and other Irish Chieftains, and his intention was to keep all the Irish families lined up and continue his rule as High King. The Vikings were a thorn in his side though, and constantly challenged his position as High King. He had fought and won many battles against them over the years in Thomond (now Munster). 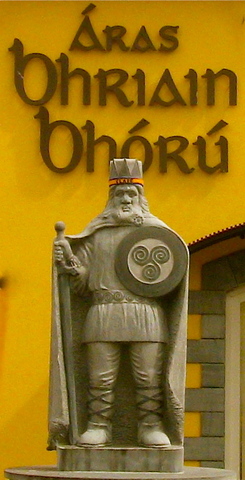 A statue of Brian Boru in Tuamgraney, Co. Clare

In 1014 one of these marriage alliances broke down as Mael Mordha, King of Leinster, revolted against Brian and joined forces with the Vikings in Dubh Linn. They then attacked the Kingdom of Mael Seachlainn in Co. Meath, who sent a messenger to Brian at Kincora appealing for help to fight off the combined forces of Leinster men and Vikings. Brian assembled a force of Dalcassians and Munster Men and marched towards Clontarf, not knowing that this would be his last battle. The Catholic Church in Killaloe, Co. Clare sits on the site of the Banqueting Hall of Brian Boru's Palace at Kincora.

Kincora was the site of Brian Boru's Palace and it was in what is now known as Killaloe, Co. Clare. During  the twelve years of Brian's reign it was the capital of Ireland. It was situated on top of a hill overlooking a ford over the mighty River Shannon. This position was a stronghold against the Viking raiders who would come up the river from the estuary at Limerick in order to pillage the many monasteries, churches and villages along the banks and further up in the loughs of the Shannon system. 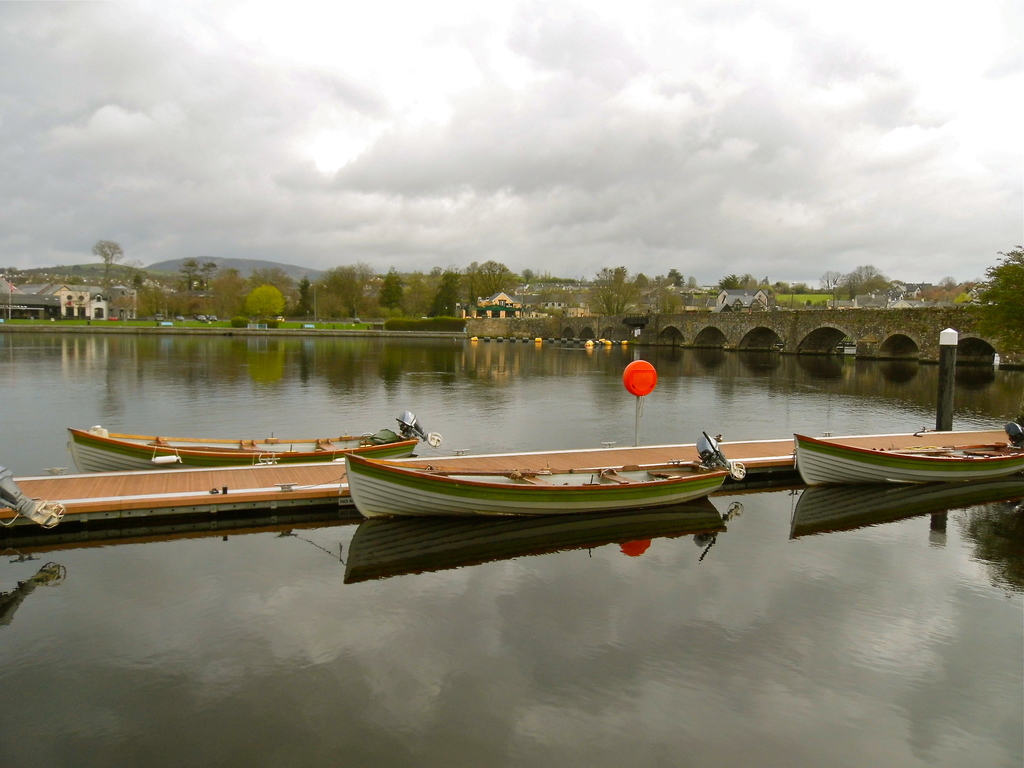 The Bridge spanning the Shannon between Killaloe Co. Clare and
Ballina, Co.Tipperary is directly underneath the Palace site at Kincora.

Upstream a mile from the Palace at Kincora stood Brian Boru's Fort at Béal Ború. It is said that this is where Brian was born and reared. It is in a beautiful location at the very southern tip of Lough Derg as it narrows into the river Shannon again. it is thought that because of the narrow strip of water here it would have been used as a shelter for boats on the lough, and a crossing place for cattle from Tipperary into Clare. It is a very peaceful place and you can sit here, dreaming about history while watching cruisers and sailing boats going past along the river. Béal Ború  (just outside Killaloe) is where Brian Boru was born and reared. A peaceful place to visit. Béal Ború is now covered in Beech trees.

If you come and visit Killaloe you may feel a sense of the history as you walk up the hill towards the site of the Palace of Kincora. You will also see the commanding view of the river and surrounding countryside that Brian and his people would have had from the Palace. Coincidentally, the Police station and Catholic church now occupy the site of the Palace. Church and State holding on to a power position maybe? There are several pubs,restaurants and coffee shops in Killaloe and Ballina where you can have a drink or meal whilst enjoying the view, and preparing to continue your tour of Brian Boru Country. Here is a link to a video tour of "Flanagan's on the Lake" which is just across the bridge in Ballina.        Flanagan's on the Lake 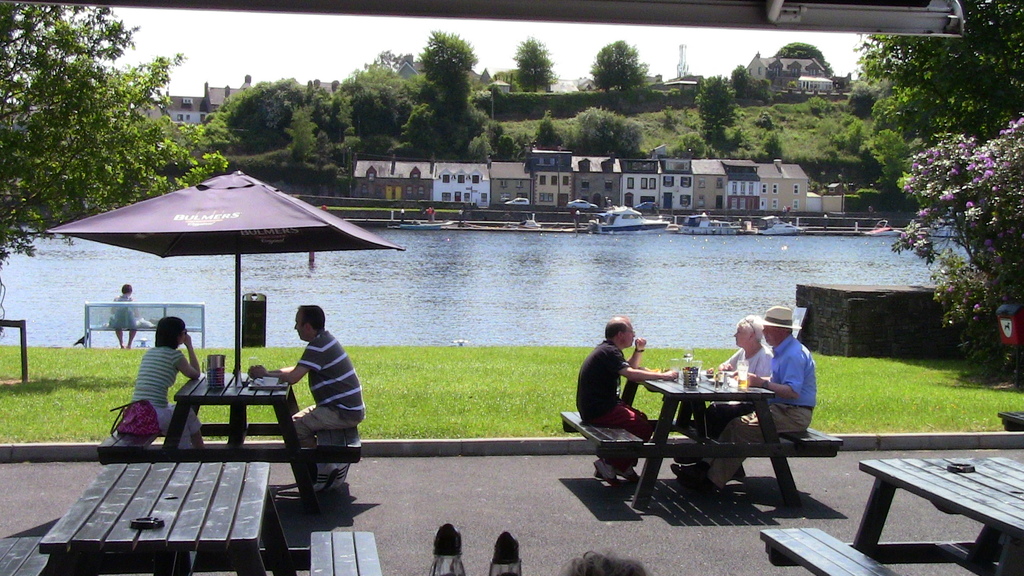 Watching the world go by at "Flanagan's on the Lake".

Eleven miles from Killaloe along the western shore of Lough Derg you will come to Raheen Wood. It is one of the last few acres of the great forests that once ringed the Lough. In the woods is one of the oldest trees in Ireland; The Brian Boru Oak, which is thought to be well over 1000 years old. 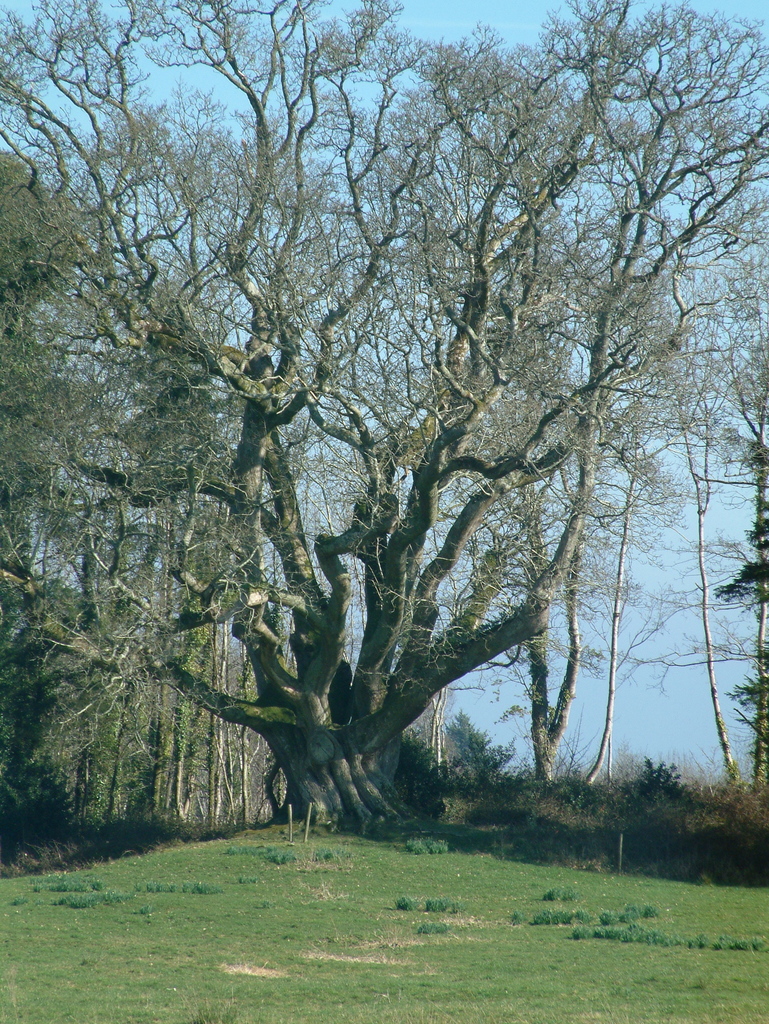 Giant oak trees like this used cover the land around Lough Derg but, nearly every one was cut down during the early 17th Century to produce charcoal for Iron making. (That's a story for another blog post in the future). 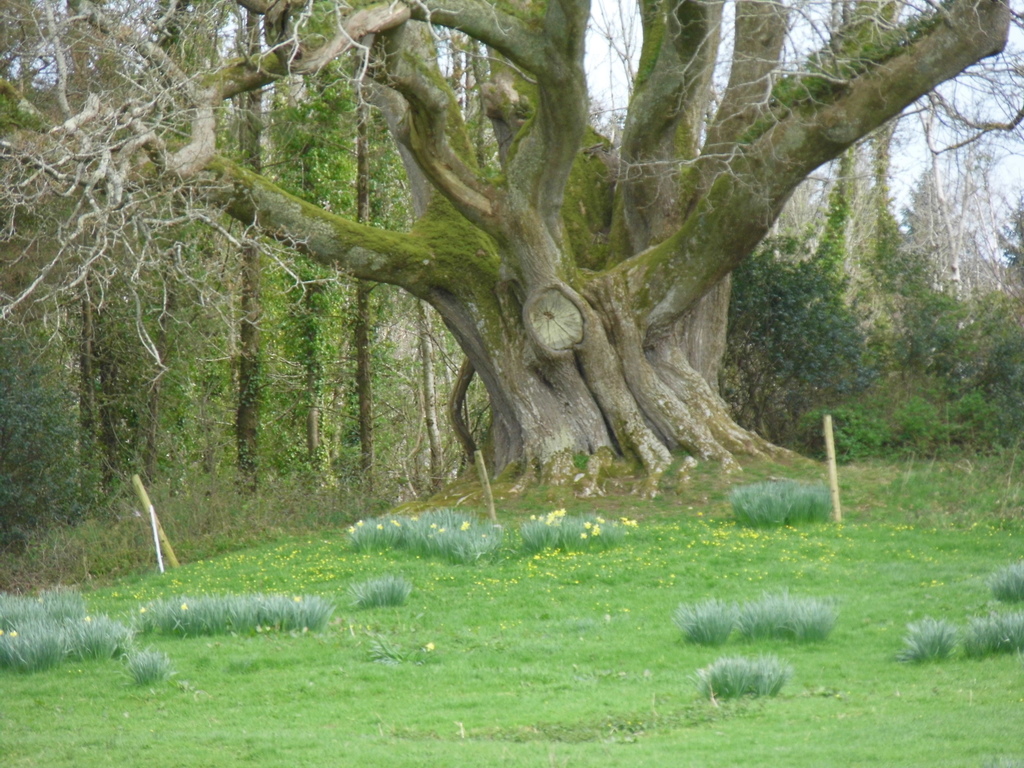 A view of the huge trunk of the Brian Boru Oak.

There's a story of one Viking raid on Holy Island, Lough Derg, and it tells that the Viking boat was holed as it came ashore. The Vikings came to Raheen Woods and sawed a bough off the Brian Boru Oak to repair their boat. You can see in the photo above where they cut the bough from. Unfortunately, the Brian Boru Oak is on private land and not accessible. Hopefully in the future we might be able to make it accessible to visitors. My photos will have to do for now ! St. Cronan's Church in Tuamgraney, Co. Clare. The oldest church in Ireland still in use.

Just beside Raheen Woods is the tiny village of Tuamgraney and here you will find the East Clare Heritage Centre. It is situated in St. Cronan's Church which was built in the early 10th Century. Brian Boru had a long association with this church and he is mentioned as having had the bell tower repaired when it was damaged. There is a museum in St. Cronan's, and from April on it is open to the public. here you can find out about Brian Boru's connections to the church and the surrounding areas. Here is a link to the video tour of the centre;      East Clare Heritage Centre

During his reign Brian Boru's name has been mentioned as building seven monasteries and 32 Round Towers, or in Irish "Cloitheachs". I'm sure it is safe to say that Brian built the Round Tower on Holy Island which is situated on Lough Derg, just off Mountshannon, Co. Clare.

Holy Island on Lough Derg has a Round Tower and the ruins of six churches, a Holy Well, and other ancient structures like a "Bargaining Stone" where deals were struck and marriages made. It was very bad luck to break a deal made, by shaking hands underneath the bargaining stone. The island is one of the most famous monastic sites in Ireland and probably one of the best preserved, As I said earlier the Vikings attacked sacred sites along the Shannon and Lough Derg and the first recorded one here was in 836AD. Brian Boru is said to have rebuilt one of the churches on the island after a Viking attack. Brian's brother Marcán was at one time Bishop Abbot of Holy Island. Holy Island has the ruins of six churches with one dating back 1400 years.

You can only access Holy Island by boat and is an amazing place to visit. Gerard Madden (a local historian) can bring you out and give you a guided tour. He knows all the stories about the Island and is very dry witted and entertaining. Here is a link to the video tour of Holy Island. It has been a millenium since Brian Boru's death and there are commemorations on in many places in Ireland throughout the year of 2014. Féile Brian Boru is an annual festival in Killaloe, and this years, on July 3rd to the 6th, is a really special one to commemorate Brian's 1000th anniversary.

There was a recreation of the Battle of Clontarf just last weekend in St. Anne's park in Raheny, Dublin. Thousands of visitors came to see re-enactors from all over Europe battle it out as Irish or Viking warriors. You will be glad to know that Brian Boru won many of the re-enacted battles over the weekend too. 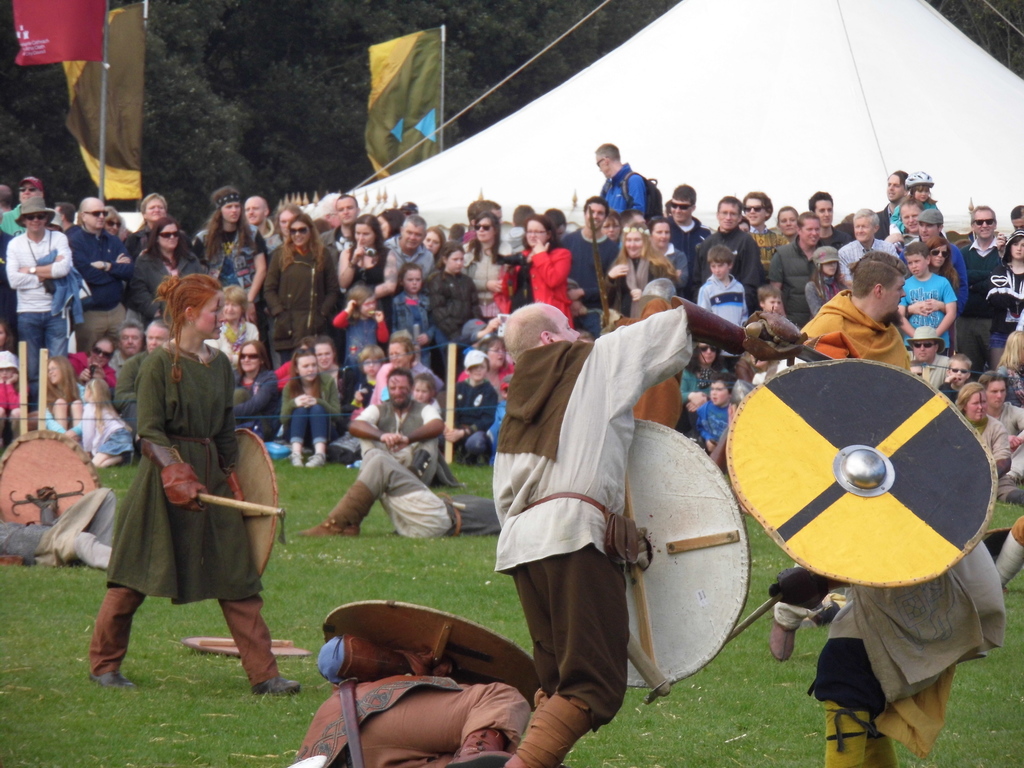 One of the scenes from the recreation of the Battle of Clontarf in Dublin, Easter Weekend Thousands of people came to watch the spectacular recreation of the Battle of Clontarf.

County Clare has some spectacular scenery,and its connection to Brian Boru is celebrated every year. He was one of Ireland's greatest High Kings, and will never be forgotten by the people of Clare. His death had a big impact on Irish people and his name still conjures up visions of heroic acts and battles.

The Lough Derg region of Co. Clare is just over two hours by road from Dublin City. You can drive on a good two lane Highway for all but the last 5 of 125 miles. Shannon Airport is only 40 minutes away too. Many airlines fly into Shannon Airport from the USA, Canada & Europe like Aer Lingus, Ryanair, Delta, US Airways, Air Transat & United.  Check out Shannon Airport Routes and Timetables for full details

So, think about visiting Brian Boru Country in Co. Clare sometime and go walking "In the Footprints of History".

www.ClareVirtually.ie is the place to research a trip to Co. Clare. Sixty second video tours of the tourism product. A quick tour of the pub, restaurant, attraction or accommodation with a Céad Míle Fáilte from the owner or manager. "Look then Book"

If you require any further information you can send an email to me eoin@clarevirtually.ie

Hope to see you in Brian Boru Country soon !

All Photos and Videos are © of Eoin O'Hagan and www.clarevirtually.ie

Go raibh mile maith agat for sharing this information. Killaloe is a favored stopping point for me. I try to  direct as many of my clients as possible to Lough Derg and its beauty.

I have not visited Ireland since 1978.  There was small restaurant that just catered a few meals each evening.   It is one of the best gourmet meals I have ever had.   Just saying,   and wondering if still there.  It was said that the chefs were a husband and wife that retreated to Killaloe to do this, from N. Ireland.