'Born a Soldier': Myles Walter Keogh - Part 2 of 3: Conquering The South and The Plains

All the bright aspirations of a soldier's glory, all my enthusiasm for the pomp and circumstance of glorious war, fell coldly upon my heart; and I looked upon the chivalry of a soldier's life as the empty pageantry of a dream.
-- From Charles Lever's 'Charles O'Malley, the Irish Dragoon' (Dublin, 1841)

Captain Theodore Allen of the 7th Ohio Cavalry later recalled that Myles Keogh's dandyism made him at first far from popular with the hard-bitten western troopers. "We did not like the style of Captain Myles Keogh," Allen wrote; "there was altogether too much style. He was as handsome a young man as I ever saw. His uniform was spotless and fitted him like the skin on a sausage." But Allen revised his opinion when Keogh gallantly led the Buckeyes in a charge during the Atlanta campaign. "Raising himself in the stirrups, and with cap in one hand, he turned to the battalion and cried out, "Hip, hip hurrah boys! Here we go!"

General Stoneman saw to it that Keogh was promoted Major and acting chief of staff. In that capacity he accompanied the General on a daring raid behind enemy lines to free the Union prisoners incarcerated at Macon, Georgia. If all went well, Stoneman planned to continue on and liberate the notorious stockade at Andersonville. But on July 31, 1864 the Confederates surrounded and attacked Stoneman's troopers outside of Macon. Both Stoneman and Keogh had their horses shot from under them and were taken prisoner. Confined in Macon and later at Charleston, South Carolina, Keogh was fortunate enough to be exchanged with General Stoneman on September 30. "I thank God I was thought enough of by Genl. Sherman to be specially exchanged," Keogh wrote his sister Ellen. "I should have died in a very short time & as it is I am almost broken down."

After recovering his health, in the war's final months Keogh rendered distinguished service as chief of Stoneman's staff in a series of destructive raids through North Carolina and southwestern Virginia, frequently leading squadrons and regiments in action. The 25-year-old Major emerged from the Civil War with the brevet rank of lieutenant colonel in both the Volunteer and Regular Army. Keogh's superior officers were effusive in their praise. "He is unsurpassed in dash," General Alvan C. Gillem wrote. "His soldierly bearing and spirit were a model," noted General Jacob Cox, "he was born a soldier." General John M. Schofield called Keogh "one of the most gallant and efficient young cavalry officers I have ever known." With recommendations like these Keogh was hopeful of obtaining a commission in the postwar Regular Army. In the meantime the young soldier spent several months on occupation duty in Knoxville, Tenn. Keogh shared rustic quarters with Colonel Andrew J. Alexander and his young bride, Eveline Martin Alexander. Generals Emory Upton and James Wilson were frequent guests at what Evy Alexander called "a cavalrymen's menage," and Keogh counted both men among his closest friends. Indeed when General Upton wed Evy Alexander's sister, Emily Martin, he asked Keogh to serve as groomsman and accompany the couple on their honeymoon in Europe. Keogh was not able to do so, but the invitation is an indication of the regard that the brilliant military theorist, Upton, had for the Irish cavalryman. This camaraderie was some consolation for the loss of his Papal Army friend Joseph O'Keeffe, who had been mortally wounded leading the 2nd New York Cavalry at the battle of Five Forks.

Capt. Joseph O'Keeffe (1842-1865), Keogh's comrade in Papal service and on Gen. John Buford's staff in the East. O'Keeffe was wounded and captured at Brandy Station. Exchanged, he joined Phil Sheridan's staff and accompanied him on his famous ride to Cedar Creek. O'Keeffe was mortally wounded at the battle of five forks as Major of the 2nd New York Cavalry. Image courtesy of Brian C. Pohanka It was through his association with Upton and Alexander that in October of 1866 Myles Keogh first visited "Willowbrook," the Martin family estate on Owasco Lake, near Auburn, New York. Over the next decade Myles Keogh became almost a member of the family, and would frequently regale the young ladies of the household with his spirited reading of his favorite book, Charles Lever's swashbuckling novel of the Napoleonic Wars, Charles O'Malley the Irish Dragoon. As Evy Martin Alexander put it, Keogh "wound himself about our hearts." Some authors have implied that there was a budding romance between Keogh and Cornelia "Nelly" Martin, one of Evy's and Emily's sisters -- though there is little to support that contention. Nelly's lifelong solicitude for "My precious Keogh," as she referred to him, was in reality more sisterly, even maternal, than romantic.

Not long after the war Myles wrote his brother Tom, "My great weakness is the love I have for the fair sex, and pretty much all my trouble comes from or can be traced to that charming source." By August of 1866 this rakish tone had changed. "I have now no one else to care for," Keogh wrote; "I am very, very lonely...I have had some things to try me severely, so much so that the future is of little importance to me." The reason for Myles' depression was revealed two months later in a letter written to Tom from Washington, D.C.: "....my hopes are dead for my future earthly happiness & the dear creature I dreamt of being happy with lies yonder in Oakhill Cemetery where I have just visited her cold vault." While Keogh never divulged the identity of his "dear creature," research indicates that she was likely Abby Grace Clary, the 28-year-old widow of Captain Robert Emmett Clary, Jr., a recently deceased veteran of Buford's command. Her death on June 17, 1866 was a blow from which Keogh never entirely recovered. From then on, as he informed Tom some years later, "I never propose to form any ties. I might often have married for money but I never gave it a moment's serious thought & never propose to." 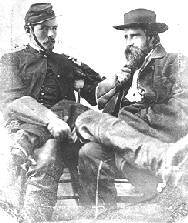 Capt. Keogh and his friend, Lt. Col. A.J. Alexander, circa 1864. Note that Keogh is pulling Alexander's long beard and that their legs are intertwined. Image courtesy of George Martin

Myles Keogh's initial Regular Army assignment was to the 4th U.S. Cavalry, but he never served with that unit. In November of 1866 he was ordered to Fort Riley, Kansas, to become Captain of Company I in the newly formed 7th U.S. Cavalry Regiment, in which the flamboyant "boy general" George Armstrong Custer was now serving as Lieutenant Colonel. The regiment's 12 companies were more often than not dispersed among various frontier posts, and Captain Keogh was placed in command of Fort Wallace, Kansas, an isolated garrison on the Smokey Hills Trail. He soon discovered how frustratingly different Indian warfare was from European and Civil War campaigning. After a typically unsuccessful pursuit of a Cheyenne raiding party, Keogh informed Regimental Adjutant Myles Moylan, "without knowing exactly where to surprise their camp, or having a guide who can track them at a run, it is a waste of horseflesh and time to endeavor to come up with them."

Keogh invariably rose at daylight to make his rounds, and passed much of the day in mundane military routine. What little spare time was allowed him he spent hunting, and prided himself on his ability to shatter a bottle at a distance of 150 yards. The sadness he felt upon learning of the death of his old Papal comrade Dan Keily -- who succumbed to yellow fever in Louisiana -- was tempered by a new acquaintance. "I have a nice fellow with me," he wrote, "an Irishman & Catholic. He formerly belonged to the 41st Foot, English Army, a graduate of Sandhurst & served in the Crimea." This officer, Lieutenant Henry J. Nowlan, became Keogh's closest friend in the regiment.

Part 3: Riding With Custer Into Eternity