Now I like Garryowen,
When I hear it at home,
But it's not half so sweet
when you're going to be kilt.
-- From Charles Lever's 'Charles O'Malley, the Irish Dragoon' (Dublin, 1841)

Myles Walter Keogh was born on March 25, 1840, at Orchard House, a stone dwelling that still stands near the village of Leighlinbridge, County Carlow. Myles' father, John Keogh -- the name sometimes appears as Kehoe -- was a Carlowman whose brother, Patrick, had been executed by the English at Carlow town following the Uprising of 1798. The family was staunchly Catholic and, despite the mistaken claims of some authors, John Keogh never served as an officer in the 5th Royal Irish Lancers or any other British army unit. Myles' mother, the former Margarete Blanchfield, hailed from a prosperous landholding clan whose ancestral seat was at Rathgarvan, near Clifden in County Kilkenny.

In the photo above, taken during Keogh's first months of service in the Union Army, he wears the medals from Papal Service, "Pro Petri Sede" and Ordine di San Gregorio."

Myles and his 12 siblings -- four boys and eight girls -- were reared in comfortable if not wealthy circumstances, and had he chosen to live the life of a gentleman farmer he could probably have done so. His maternal aunt Mary Blanchfield ultimately willed Myles the family estate in Kilkenny known as Clifden Castle. But while Myles' favorite brother, Tom, was content to follow a staid course through life, there was something in the makeup of the tall, slender blue-eyed youth that craved adventure. His career would in many respects epitomize the peripatetic wanderings of the "Wild Geese" who sought glory on foreign shores, amidst the clash of arms.

In March 1860, Pope Pius IX called upon the young men of Ireland to help preserve the sovereignty of the Papal States, which were threatened with annexation by the armies of Piedmont-Sardinia. While many Italians, sympathetic to the Piedmont-backed revolutionary forces of Garibaldi, viewed the continued existence of the Papal holdings as an impediment to a united Italy, Catholic volunteers from throughout Europe rallied to the Vatican's support.

Keogh was among the 1,400 Irishmen who traveled to Italy, and in July was appointed lieutenant in a four-company battalion garrisoned in the Adriatic port city of Ancona.

Below, Irish soldiers of the Papal Guard, the Company of St. Patrick, 1861. Lieutenants Keogh and Daniel J. Keily stand at center. Image courtesy of John Monahan 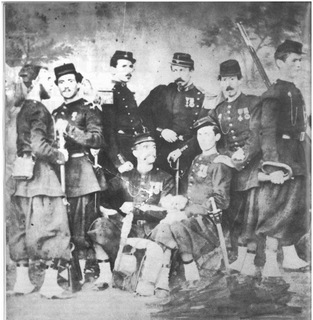 On September 18, the main body of the 18,000-man Papal Army was defeated in the battle of Castelfidardo, and Ancona was soon besieged by land and sea. The outnumbered Papal defenders put up a spirited defense until the inevitable capitulation on September 29, 1860. Following a brief incarceration in Genoa, Keogh and 45 Irish comrades traveled to Rome, where at the invitation of Pius IX they joined the Papal Guard as the green-uniformed "Company of Saint Patrick."

The dashing young lieutenant now sported two medals for valor, the Pro Petri Sede and Ordine di San Gregorio; but with the fighting over Keogh saw little purpose in remaining at Rome. With Civil War raging in America, Secretary of State William H. Seward began seeking experienced European officers to serve the Union, and called upon a number of prominent clerics to assist in his endeavor. John Hughes, Archbishop of New York, traveled to Italy to recruit veterans of the Papal War, and met with Keogh and his comrades. One highly decorated officer of the Irish Battalion, John J. Coppinger, had already departed for America where he obtained a commission in the U.S. Regular Army, and others soon followed.

Below, Brevet Brig. Gen. Daniel J. Keily (1829-1867), Keogh's Papal Army commander and friend. Keily was born at Newtownville, near Waterford. He died of Yellow fever in Pointe Coupee, Louisiana, and his resting place is unknown. Image courtesy Library of Congress

Thus in March of 1862 Keogh resigned his commission in the Company of Saint Patrick, and with his senior officer – 30-year-old Daniel J. Keily of Waterford -- returned briefly to Ireland, then boarded the steamer Kangaroo bound from Liverpool to New York, where the vessel arrived April 1. Another Papal comrade, Joseph O'Keeffe – 19-year-old-nephew of the Bishop of Cork -- rendezvoused with Keogh and Keily in Manhattan. Through Secretary Seward's intervention the three were given Captains' rank and on April 15 assigned to the staff of Irish-born Brigadier General James Shields, whose forces were about to confront the Confederate army of Stonewall Jackson in the Shenandoah Valley.

Keogh won plaudits for his bravery in the Valley Campaign, most notably in the engagement at Port Republic on June 8, where his comrade Dan Keily was severely wounded. In the early stages of the fight Keogh led a mounted patrol that very nearly captured Stonewall Jackson himself. On July 31 Keogh and O'Keeffe were transfered to the staff of cavalry Brigadier General John Buford. That tough, veteran horse soldier found his Irish aides just the type of officers he was looking for, commending them as "dashing, gallant and daring soldiers." Army of the Potomac commander George McClellan was equally impressed, describing Keogh as "a most gentlemanlike man, of soldierly appearance," whose "record had been remarkable for the short time he had been in the army." Captain Keogh served with Buford through the Fredericksburg and Chancellorsville campaigns, and was in the thick of the huge cavalry clash at Brandy Station, where his friend O'Keeffe was shot in the leg and captured. For his part in the epic battle of Gettysburg, where Buford's gritty stand on July 1, 1863 contributed mightily to the Union victory, Keogh received the brevet rank of Major. When Buford contracted typhoid fever that autumn, Keogh accompanied the ailing General to Washington and stayed faithfully at Buford's side till he succumbed on December 16, 1863. Distraught at the death of his beloved commander, Keogh accepted a transfer to the war's Western Theater where he was appointed to the staff of General George Stoneman, commanding the mounted forces of Sherman's army.

Part 2: Conquering The South and The Plains

in 1976 a friend of mine, a civil war history enthusiast, visited keough’s grave in auburn on the 100th anniversary of his death and was told by a cemetary worker that he was the second visitor that day. oh, and who was the other, he asked. an elderly woman who comes every year in a chauffer-driven car with rhode island license plates, the worker said. curious,  the friend went back a year later, but the woman did not appear. frank mcloughlin

Any discussion on her identity?

no, but ifbrian were still he might have been able to give it a go, frank. i am going to pass it on to some whomight know where to look.