'Blood From a Shadow' Is a Wild Ride 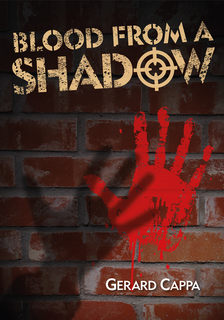 I recently finished Gerard Cappa’s thriller, "Blood From a Shadow."  If you had been with me at the time, you would have heard a loud exhale as the little readometer on my Kindle rolled over to 100%.  Cappa’s main character and narrator, Con Maknazpy, is a bundle of confusion and rage, with a heavy dose of PTSD to round out his psyche.  That exhale expressed my relief at being now on the outside of his very messed-up head.

Our first impression of Con is as a grumpy, washed up vet.  We only have to go a few pages before our hero has grabbed a childhood friend by the windpipe.  This is the first of his numerous "Rambo" moments.  However, we soon find out that Con is all too human, as he aches to reconcile with his estranged wife and son.  Con is asked to travel from New York to Ireland to see the mother of his late friend, but soon finds himself entangled in a web of corrupt cops, CIA spooks, drug dealers, terrorists, and papal operatives.  A Jason Bourne-esque adventure ensues, in which Con is continually on the run and repeatedly deceived by those he trusts.  He typically discovers his betrayers’ true intentions while holding them in a headlock...yes, even the priest.  Con’s exploits send him globetrotting from Irish boreens to Roman chapels to the chaotic streets of Istanbul.  Our author is clearly a well-travelled man who knows these places intimately, and he educates us on the parallel sub-cultural divides found in each locale.  Bloody showdowns in each destination leave Con wondering if he is cursed by the shadows of history and by a deep secret coursing through his own veins.  He’ll discover the truth while saving the world, and those he loves most, in epic fashion.

This plot summary settles the book squarely in the macho action adventure genre, which I confess, is not my cupán tae.  The combat is constant, the hero is unstoppable, and the women are hot, crazy, or both.  Indeed, Cappa’s early drafts must have been housed on the same shelf as his Victoria’s Secret catalouge, beause every female soldier, spy, and hooker seems to have leapt from one to the other, which is accepted within the genre.  My fellow females will be pleased to note that unlike Steig Larsson, Cappa resists the urge to have Con jump into bed with each of them.

That bit of restraint is one indication that Cappa has more to say to us than most of the Clive Cussler crowd.  There is a thoughtful second layer to the story that speaks to larger themes of illusionary free-will and Eastern vs. Western ideals.  This is also a cautionary tale about trusting your mother, or your mother country too much.  There is a “9/11 Truther” element to the plot that makes me cringe a bit, but the point that people can drastically lose their way in misguided patriotism is a valid one.  Con’s constant disorienting realizations echo our suspicions that each of us is a small cog in a big machine, the purpose of which we do not know.  Some action writers attempt these sorts of themes, but most lack Cappa’s nuance.

You’ll notice that the characters in "Blood from a Shadow" make some unlikely choices at times.  They also have names that seem a bit out of place.  These idiosyncrasies are a door that the author has left ajar to tempt you into a third layer of his book.  Do a bit of digging into the heroes and villains of Irish mythology and history (and the places where they overlap), and the fuzzy edges around some of these characters begin to come into focus.  I felt much more engaged with the story when I “copped on” (to borrow the Hiberno-English phrase) to Cappa’s clever subtext.  If you’re new to Irish tales, start with the legend of Cúchulainn and his foster brother Ferdia; you might just predict the final plot twist!  I have no doubt that sitting down for a chat with Gerard Cappa would increase my understanding of Irish history, and maybe a great deal more.  In exchange, I’d offer to help him rid his American characters of a few un-American quirks that made me chuckle, like calling our forty-third president “George Bush junior.”

Cappa has promised a sequel (and possibly two) to his ambitious first novel.  We’ll willingly suspend disbelief to accept that even more people will stop at nothing to kill the Polish kid from Yonkers turned mythic Irish hero.  Keep at it Gerard!

'Blood', Belfast, and Brando: Transcript from Live Chat with Author...

And longer still grows my "must-read" list ... but I had added your;s to the list after our very first conversation.. My father is looking forward to reading it, too... should make for some interesting conversations

Wow, I'd like to hear more about that, Ger!

Now you understand my comment to you about turning back, and re-reading your multilayered masterpiece, Gerry! Following this review, I shall have to delve into that fourth layer. Congratulations!