As we were heading north on R-702 in Kiltealy, County Wexford during our recent vacation to the southeast of Ireland, my eye caught sight of some sort of plaque on the wall along a driveway to the right. There was a beautiful horse farm that seemed to run along both sides of the road there, with several horses grazing along the left side. Stopping at the side of the road I walked back to take the picture you see above.

Most of us have heard of the famous Wexford-born Father John Murphy of Boolavogue. Even people who know little about the history of the 1798 Rising often know his name from the song. Far fewer are aware of the story of this Wexford born priest and 1798 rebel, Father Mogue Kearns. The Rising was not Kearns' first experience with the dangers of revolution. Following his childhood on the idyllic Wexford farm that now bears the plaque honoring him, during which he was said to be an outstanding hurler, Kearns traveled to Paris as a young man to be educated as a Roman Catholic priest. He did not pick the optimum time or place to train for this vocation, however, as the French Revolution began while he was there.

This was a revolution that was decidedly anti-Catholic because of the church's close relationship with the French royal family. "À la lanterne!" (i.e. hanging their enemies "to the lantern") became the cry of the revolutionary mobs in Paris. A mob can be seen demonstrating this unintended use of a Paris lamp post to the left.

It's said (and we'll never know if it's true) that somehow Mogue found himself set upon by the mob. He was hung from a lamp post and apparently this was to be the end of the story of Mogue Kearns, an Irish seminary student who was in the wrong place at the wrong time. However, either because the post was old and weak, or because Kearns was a large man, it bent and he was able to keep his toes on the ground.

As the story goes, he was then cut down by a physician who was a friend of his and saved. What the mob was doing during all this we'll have to leave to our imaginations, but the first attempt to hang Mogue Kearns (if it is not apocryphal) had failed. Unfortunately for him, it would not be the last such attempt.

Following his near death experience with the mob, he would be ordained and appointed curate at Balyna, on the Kildare-Meath border. Evidently Kearns decidedly unpleasant experience with revolutionary republicans in Paris had not soured him on the republican movement overall, and he was soon dismissed by Bishop Delaney for being "politically active" with the United Irish movement in Ireland. As was the case in France, the higher level of Catholic clergy in Ireland usually supported the status quo.

The now-suspended Fr. Kearns returned to County Wexford and there became involved with the local United Irish movement. This is not surprising, given his family's deep involvement in the movement. Two of the other United Irish leaders in the area were Mogue's brothers, and several cousins were also members. One of his brothers, Martin, was killed at the Battle of Castlecomer on June 24th.

When the Rising began and Father John Murphy marched on Enniscorthy, Fr. Kearns joined him, leading a body of men from the Kiltealy area. The rebels used the rather brilliant tactic of driving their herd of cattle through one of the gates to confuse the defenders of the town and help in their capture of the town. They then marched on Wexford town, which surrendered on May 31st and the so-called Wexford Republic, short lived as it would be, had been formed. It's a measure of the regard the leadership had for Kearns that he was given command of a column of 2,500 to be sent toward Newtownberry (now Bunclody), County Wexford, with hopes of connecting with rebels in the midlands. Kearns' column was at first successful in driving the defenders from the town, but they were reinforced and counterattacked. Kearns was driven back. They retreated to the rebels' Vinegar Hill camp.

During the disastrous defeat at Vinegar Hill on June 21st (depicted to the right at the 1798 Centre in Enniscorthy), Kearns commanded troops in the town of Enniscorthy. His men managed to keep the British from capturing the bridge and flanking the men on the hill to cut off the main force on Vinegar Hill until the retreat began, no doubt saving many of their comrades. By all accounts, the rebels in the town put up a tremendous fight that day. Kearns escaped the later rout, but was wounded during the fighting. He managed to hide until he recovered, then rejoined some rebel forces hiding in Killoughram Woods, west of Enniscorthy.

While the defeat at Vinegar Hill is often seen as the end of the Rising in the southeast, in reality most of the rebels escaped, thanks to the work of Kearns' men in Enniscorthy and the late arrival of the British column under General Needham. Or others would say because of the inept leadership of Lake, the commanding general. The rebels remained in the field for a time, now more scattered and engaging in more hit-and-run type actions, constantly on the run from large British formations. (Above, the view of Enniscorthy town from the top of Vinegar Hill)

Fr. Kearns' rebel column managed to make it safely toward the northwest and join with another rebel group in Timahoe, Co. Laois, southwest of Portlaoise on July 10th. Together the two groups totaled about 4,000, demonstrating that the movement had not died at Vinegar Hill, but unless more areas of the country rose up, its days were numbered. The boggy area around Timahoe couldn’t possibly sustain 4,000, and the remnants of the Wexford Republic staggered northward, ever hopeful of getting more to rise up in the midlands to continue the fight.

The next day they attacked a the fortified home near Clonard, Co. Meath. At that point, according to the book in "The Robinsons of North Kildare," by James Robinson, Fr. Kearns was captured by the yeomanry and put on a horse under a tree with a noose around his neck, which in turn was tied to a branch. The yeoman then apparently left him, knowing the horse could not stand still forever. This was perhaps just a way to mentally torture Kearns before his inevitable death. According to Mr. Robinson, however, this was observed by a daughter of the Robinson family, from a neighboring home. She went to the tree offering to free the good father if he would agree to marry her. Though he refused, citing his vows of celibacy, she released him anyhow. If, once again, this story is not  apocryphal, it was the second time Kearns had the hangman's noose around his neck and lived to tell the tale, though only briefly this time.

In less than two days, with small yeomanry forces snapping at them from all sides, food and ammunition running out, and many of their number simply walking away and hoping to make their way home, the end had come. Fr. Kearns and Anthony Perry, one of the Protestant United Irish leaders, made an attempt to return to Timahoe. Had they made it there they may have lived, as the leaders there were even then arranging a surrender in which they would be arrested, but not executed. But their luck ran out and they were captured by yeoman in the town of Edenderry, Co. Offaly. 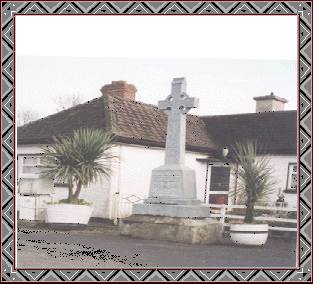 Perry and Kearns were hung by the yeomanry on July 12th (or perhaps not until as late as the 21st according to other sources) after a sham "trial." This time there was no faulty lamp post or friendly physician nor any kindly young woman in search of a husband to save him from his fate, and yet the stubborn priest would still "not go gentle into that good night" when it came to the hangman's noose. When a yeoman cut him down, he was still breathing. One of them then beheaded him with an ax, doing the job that hanging apparently could not accomplish with this man. So finally ended the short but very eventful life of Fr. Mogue Kearns.

Perry and Fr. Kearns were buried in Monasteroris Cemetery, just outside of Edenderry. There is a monument there commemorating Kearns and another in his hometown of Kiltealy. (Shown right, photo by Walter Skelton)

The famous Irish tenor Anthony Kearns claims Father Kearns as a member of his family tree.

Fr. Kearns cheated death several times before his time finally came, but unlike his pointless near-death in Paris earlier, his death in Edenderry had been for a cause dear to his heart. Though many in and around County Wexford are aware of his contributions to the fight for Irish freedom, more in Ireland and around the Irish diaspora should know his story.

Saved by a Robinson Girl

Thanks for this, a chara... Mogue should well be given his due...

knowing the lineage that Anthony claims, listening to him sing Boolavogue is a haunting experience...