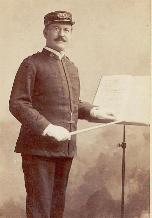 A TV documentary on the St. Louis World Fair mentioned how John Philip Sousa and his band dominated the entertainment, which included a young John McCormack singing at the Irish Pavilion. It brought to mind a forgotten era when American superstars were not individuals with a current hit record but band leaders – people with the ability to not only play, but compose, arrange, and lead a musical organization. And, in the beginning, America’s first superstars were the leaders of her first marching Brass Bands, and though Sousa was certainly one of them, he was not the first. That honor goes to a man whom Sousa himself called his mentor and whom he acknowledged as matchless. He was a man who, in his day, was called n America’s Greatest Bandleader and The Musician of the People. Sadly, today few remember his name, though most still know his works, and his life story would be a movie of epic proportions.

It began on Christmas Day, 1829, when a boy was born to the Gilmore family in Ballygar, Co. Galway named Patrick (right). After a difficult childhood, having experienced the horror of The Great Hunger, he emigrated to America in 1848 at the age of 18. His love of music led him to the many Brass Bands that were popular in America at the time, and he joined one as a coronet player. He settled in Massachusetts, where his Irish pride caused him to adopt the middle name of Sarsfield; he told Horace Greeley and his in Boston Nativists, You know little about Patrick Sarsfield and what he did for Ireland, but I do! He eventually became the leader of the Charlestown Brass Band, then the Boston Brigade Band, and finally, the Salem Brass. In 1856, he started his own band, which he called Gilmore’s Boston Band, and began to change the image of American music.

At a time when the prevailing notion was the louder the brass, the better the band, Gilmore became the first major bandleader in America to conduct brass band arrangements of classics by Mozart, Liszt, and Rossini. When that made everyone sit up and take notice, he extended his repertoire to standard works, one of the most popular of which was his own composition, Seeing Nellie Home, inspired by his wife Ellen O’Neill, who was organist and choir director at St. Patrick’s Church in Lowell, Mass. Another of his compositions, written for a civil rights leader of the time, was called John Brown’s Body. Most will recognize that as the song to which Julia Ward Howe later rewrote the lyrics to create the Battle Hymn of the Republic. Glory Hallelujah, the words are hers, but the music is his! Perhaps his most enduring work was a military march that he wrote to the air of an old Irish anti-war song. Based on the tune, Johnny I Hardly Knew Ya, Gilmore created the classic: When Johnny Comes Marching Home Again for his brother-in-law, Capt. Johnny O’Rourke from Limerick who was a prisoner of the Confederacy during America’s Civil War.

(Below: President Grant and his cabinet arriving at the 1872 National Peace Jubilee.) 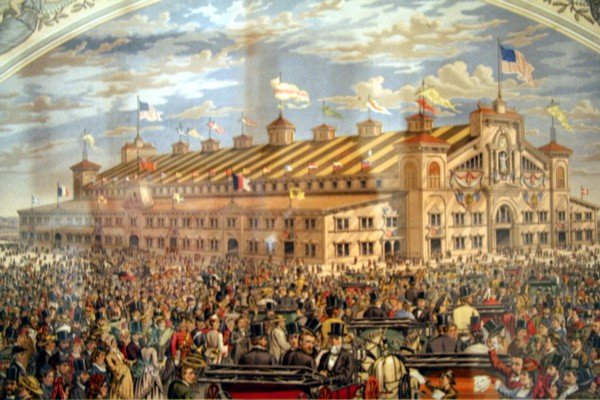 Despite his great fame as a composer and band leader, his crowning achievements were the organizing and directing of two of the largest music festivals ever held. In 1869, he organized the National Peace Jubilee and, later, the World Peace Jubilee. For the sheer number of performers, nothing has ever surpassed the latter concert, which consisted of 2,000 musicians and a chorus of 20,000 voices. He brought together leading bands from England, France, Germany, Belgium, and Ireland. The Irish band, by the way, was one he personally requested after England insisted on sending only one band to represent the Empire, of which Ireland at the time was a part. Gilmore told the Brits to send an Irish Band or stay home themselves. Such was the power of Gilmore’s name; he not only attracted the world’s best musicians and singers, but he even convinced the renowned waltz king, Johann Strauss, to compose a special piece,

The Jubilee Waltz, for the occasion and make his first trip across the Atlantic to conduct it himself. One of the highlights of the event was the performance of Giuseppe Verdi’s Anvil Chorus, with one hundred Boston firemen hammering out the rhythm on blacksmiths’ anvils. Shortly after this triumph, Gilmore left Boston for New York, where he became leader of the 22nd Regimental Band of the National Guard. For the next 20 years, he concentrated on developing what became universally recognized as simply the greatest band in the world. In 1878, he became the first American bandmaster to make a concert tour of Europe. It was a smashing success. He returned to New York and took over P.T. Barnum’s old Hippodrome building (left) and renamed it Gilmore’s Concert Garden. It became the showplace of New York, where he played nightly to a full house. If you haven’t guessed yet, when he moved on, it became Madison Square Garden. Everything this man did was colossal. It was Gilmore who was musical director for the dedication of the Statue of Liberty in New York Harbor in 1886, and it was Gilmore who, in 1891, was invited by Thomas Edison to record on wax cylinders, thereby becoming the first band to make commercial recordings.

However, his greatest legacy is still with us, though few know it. The welcoming in of the New Year on the tiny triangle of land at the intersection of Broadway and 42nd Street, known as the Long Acre in New York City, had been done for years. The formal addition of music to the celebration came on December 31, 1888, when Gilmore, leading the greatest Brass Band in America, went to Longacre Square to perform for the large audience that gathered up and down Broadway. Gilmore then led the crowd in a countdown, firing two pistols in the air at the stroke of midnight. The event quickly became an annual tradition. In 1904 the celebration was expanded to coincide with the official opening of the new headquarters of The New York Times, and Longacre Square became Times Square. In time, the celebration became an all-day street festival ending in a midnight fireworks display at midnight to the joyful music that became a part of the tradition thanks to Patrick Sarsfield Gilmore. 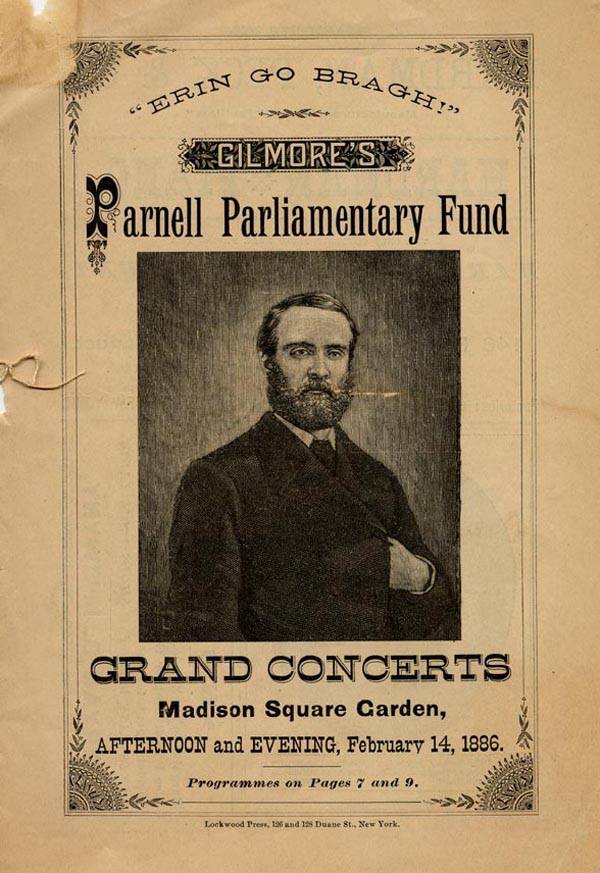 He never forgot Ireland or his fellow Irish, either. Acclaimed as an Irishman in American newspaper articles throughout his career, when Charles Stewart Parnell and Michael Davitt and their organizations needed to promote their policies, it was to Gilmore that they turned not only for monetary support but, more importantly, for public endorsement. Gilmore included references to Home Rule in his Concert Programs and even wrote a Ballad dedicated to Home Rule called Ireland to England. He raised money for Hunger Relief, Clan na nGael, the Annual Emerald Ball for Orphans, the Friendly Sons of St Patrick, etc. Gilmore spoke on the value of the Boycott to the Irish People and often declared publicly and proudly that he was an Irishman.

In 1892, Gilmore was named musical director of the Columbian Exposition in Chicago, but while on a national tour that year, he died of a heart attack on Sept 24 at 62 years of age. He was mourned by the entire nation, and thousands lined the funeral route from his home on Central Park West to St. Xavier’s Church across town and then to his final resting place in Calvary Cemetery in Queens. The great Victor Herbert said that for the hard but glorious struggle from the old bands of loud brasses and drums which made the most noise possible to bands that interpret the works of the world’s great composers to satisfy the most exacting musician, most of the glory belonged to Gilmore. It is sad that although many still know his works, so few remember his name; yet sadder still is that many who do see his name on his compositions don’t even know that P.S. Gilmore was Irish. Yet he was not only Irish but one of the Irish who helped to shape America. His musical legacy lives on to this day despite the demise of his memory. Yet, despite the fact that no Irishman ever left so many footprints of influence, there are only four memorials to America’s First Superstar worldwide, Gilmore Avenue in St Louis, a Plaque in New Orleans, a Plaque in his native Ballygar and the P.S.Gilmore Marching Band in the Restoration Village at Bethpage, Long Island, N.Y.

Thanx for adding the graphics