Have you ever had lunch with a Jewish mother? “Have I mentioned my son David graduated valedictorian from high school and is now on full scholarship to Johns Hopkins University? (About 14 times.) “Well, he’s just been accepted to next year’s, Columbia’s medical internship program for brain surgery!” No doubt, congratulations are due! Think about it -- you have about as much chance of stopping a runaway freight train with a feather as you do preventing a Jewish mother extolling her son’s success over lunch. Can you blame her?

So when skeptics of the many visitations of the Lord’s mother, Mary, suggest other than divine origins, we pause and remind them of the initial and eternal union with the Holy Spirit, ensuring that all generations will call her “blessed.” We remind the skeptics that Jesus, who existed before time, foresaw his mother before she existed in time. Imagine that.

Blessed as Mary is, her message is simple, straightforward and consistent -- to paraphrase, “Follow my son Jesus.” Or as Scripture indicates at the wedding feast at Cana, “Do everything he tells you.” None of her visitations seeks her own glory but that of her Son’s, the narrow door.

Accordingly, if the likes of modern-day evangelicals Joel Osteen, Jerry Falwell and the recently departed Billy Graham are universally praised and recognized for bringing the gospel of Jesus Christ to the laity in America, who or what on heaven or earth can or would prevent our Blessed Mother from doing the same and more to the Americas? Can anyone stop a Jewish mother from doing this?

This time of year, we reflect on one such visitation unique to the Western Hemisphere and to the Americas -- Our Lady of Guadalupe. On December 9th, 10th and again on December 12th, 1531, Mary asked an Aztec peasant named Juan Diego to bring a request to build a chapel to Mexico’s first archbishop, Don Juan de Zumárraga. Having little persuasion, Juan Diego was twice denied but was asked by Zumárraga to return with some sign indicating he was in fact receiving instruction from the Blessed Mother herself.

Mary asked Juan Diego to go and pick a bunch of flowers on a nearby hill and bring them to the archbishop as the sign he was looking for. The flowers, being at full bloom but out of season were thought to be “the sign” to be conveyed to the archbishop. The flowers were gathered up in the large shirt, the tilma, of Juan Diego. The fabric is made of a coarse agave cactus fiber. 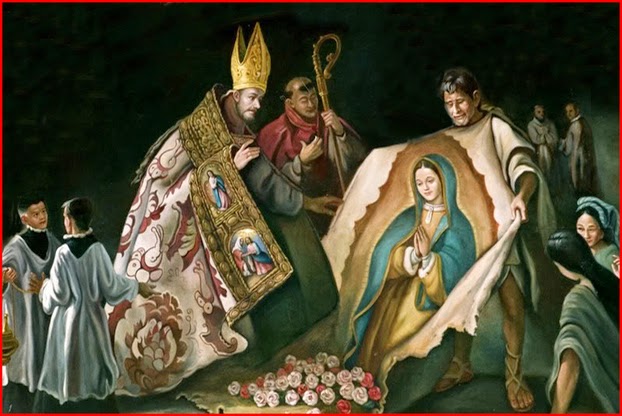 Waiting for hours and this being his third visit, Juan Diego finally opened his tilma before Zumarraga, announcing the flowers were given as a sign of Mary’s authenticity. Juan Diego did not know that his tilma had transformed into a painting of our Blessed Mother surrounded in hieroglyphics resonating directly with the Aztec-Mayan cultures. (The painting, seen in the photo above taken in December 2006, from Wikimedia Commons, is miraculously intact and with us today despite being made on material that should have decayed and disintegrated over 450 years ago.)

The impact on the Aztec-Mayan culture of Mexico was profound. Heretofore, a culture of death, including the practicing human sacrifice to pagan gods by way of removing victim’s beating hearts, was dominant in Mexico. One result of Juan Diego’s messaging: The nation converted to Catholicism. So the sacrifice of native Indian innocents was exchanged for the sacrifice of Jesus in the Eucharist. It was clear that what the Spaniards could not do at the point of a conquering sword our Blessed Mother could accomplish with a painting. One pagan, human-sacrificing, polytheist culture flipped on its head, turned on a dime -- to the Church, by a painting.

The image of Our Lady of Guadalupe is credited with the conversion of an astounding 8-9 million Aztec-Mayans at a critical time, where in Europe 4-5 million were leaving the Catholic Church during the Reformation. The timing here was impeccable, ensuring a replenished Church laity in the Americas as the that in Europe retrenched. There are many miracles both of and related to to the tilma that are worth looking up. (See “The Amazing and Miraculous Image of Our Lady of Guadalupe (2nd edition)”.)

We acknowledge that no other “artwork” known to mankind has been credited with the conversion to the gospel of Jesus Christ of such vast numbers in so short a period of time, numbers Joel Osteen, Jerry Falwell and Billy Graham, combined, would be happy to have.

And so, as we gear up for the Christmas and Chanukah season, it may be a good idea to pause, reflect, pray and celebrate with some flowers and a Spanish-Mexican meal December 12th as a prelude to Christmas, recognizing Mary’s loving evangelization and most notably, her faith in our heavenly Father in giving us her Son. Here we honor and respect one particular Jewish mother in history who will not be denied the power and freedom of the Holy Spirit in guidance to her son.

Perhaps now is the time, with Our Lady of Guadalupe’s coming 500-year anniversary (2031) for the Americas to revisit our Blessed Mother’s message as it applies to our “culture of death” society, that we may share in the Aztec-Mayan conversion one day soon.

Comment by Patricia mclaughlin on December 11, 2018 at 2:56pm
Beautiful

Dan, thanks for this post. Very moving -- and thought-provoking. Monsignor Ferrarese today at Mass pointed out that this is the only vision that Mary presents as the pregnant 14-year-old she was. He pointed out that Mary has been visiting us -- her earthly constituents -- starting with her visit to her cousin Elizabeth.

Wonderful post Dan! Too many get caught up in the commercialism that is Christmas now. This reminds us of the 'reason for the season'! There is just so much mystery to this image, the reflection in the eyes of the picture of those who were in the room at the time, the perfect alignment of the stars on Mary's cape as they were in the night sky at the time are just a couple. I so love this image! Thanks :)