The Irish green shall again be seen
As our Irish fathers bore it,
A burning wind from the South behind,
and the Yankee rout before it!

-- From the Civil War anthem 'Song for the Irish Brigade'

Since its inception decades ago, The Wild Geese.com (rechristened in 2015 as TheWildGeese.irish) has endeavored to trace the experience of the Irish worldwide. We’ve done this through the exertions of two of our founders, Joe Gannon and Gerry Regan, along with scores of fellow members who’ve contributed articles to help us with our mission of “exploring the heritage of the Irish worldwide.”

The green wreath (above) was placed during Remembrance Day, November 1992, at Gettysburg's Stone Wall by the now-defunct Irish Brigade Assocation and re-enactors from the 1st Virginia Infantry. The ribbon reads "Erin's Warriors, A.N.V." (Lee's Army of Northern Virginia). WG Photo / 1996

Read: The Confederate Monument Issue: Is it Pride or Prejudice?

We have taken on this work understanding that a reading of the history of the Irish people will not always edify. The story of the Irish worldwide, at times, relates venality and violence, as well as selflessness, great charity, abiding faith, innovation and heroism. It is a collection of journeys, if you will, marked by the ups and downs and detours that color all human existence.

So it is that through our 20 years of online, we have also explored --  in a limited way -- the Irish experience south of the Mason-Dixon line. Among TheWildGeese.irish’s more than 3,000 posts, we find 168 focused on America’s Civil War, with about a dozen of these focused on the Irish who served the Confeder...The latter comprises less than 1 percent of the total. But still, with today’s increased focus on monuments honoring Confederate figures, we have decided to consider how our pages have portrayed the Irish experience in the South.

With a higher profile for white nationalism in America,  there is much hand-wringing as to the role of commemoration of the Confederate cause, a cause that came with a full-throated commitment to retaining slavery. Let’s be clear: Like virtually everyone else in the world, we abhor that vile institution, and find it difficult to square with anyone’s understanding of morality

That said, Joe and I have realized for some time that TheWildGeese.irish’s coverage has never focused on the Confederacy’s championing of chattel slavery, a reprehensible chapter in American history. We both traveled to Ireland in March 1992, to commemorate the Irish who served in America’s Civil War -- on both sides. The project brought us together, and helped lead to the creation of TheWildGeese.com five years later.

The weeklong tour of Ireland commenced with our participation in Dublin’s annual St. Patrick’s Day Parade, with 25 colleagues portraying soldiers and musicians from the war. We assembled a five-man Union Army color guard and eight men for a Confederate color guard. The choice was made to not carry the Confederate battle flag, understanding even then it had become too provocative. We recruited the Old Bethpage Village Brass Band, which won the parade’s "best small band award" for its portrayal of a Union Army regimental band. The crowd along the parade route cheered us. No one brought up the issue of slavery, not us, not the Irish government representatives that greeted us nor the journalists who spoke with us.

Chuck Laverty, a friend for many years, rode in the parade, portraying Union cavalry commander Phil Sheridan. He later posted about slain Confederate officer Willie Mitchel, a son of Derry native John Mitchel. The elder Mitchel, an activist, polemicist and a leader of Ireland’s 1848 Rising, happened to be one of the most vocal and ardent advocates for slavery in America before and during America’s Civil War.

John Mitchel wrote in 1854, a year after his escape to America  from an Australian penal colony:

We are not abolitionists — no more than Moses, or Socrates, or Jesus Christ. We deny that it is a crime, or even a peccadillo, to hold slaves, to buy slaves, to sell slaves, to keep slaves to their work by flogging or other needful correction. ... “

You wouldn’t have learned that about Mitchel in our pages, though. We only learned of Mitchel's full-stop support of the institution of slavery this year. We are not proud of that oversight. It wasn’t deliberate. And many clearly were blinkered. A number of GAA teams have been named in Mitchel's honor, and place names in Ireland and America.

Perhaps understandably, we find ourselves with a bias toward uplifting stories of the Irish at home and in the diaspora. So in our pages, then, you will find references to only a handful of an estimated 50,000 Irish immigrants who served the Confederacy, including John Mitchel and his three sons; Galway-born Dick Dowling; Cork native Patrick Cleburne; and Confederate chaplain John Bannon, who hailed from Rooskey, County Roscommon.

We mentioned previously the controversial role monuments for Confederate figures has assumed. Should they remain in the public eye? It depends. While we might regret losing the visual history they present, we feel that the communities that host these memorials must have the final say on their fate, on the values they want their community to trumpet. We do hope, though, that these decisions will not be driven by the attempted hijacking of Confederate symbols by white nationalists. Rather, we urge that these community-by-community efforts be informed by the totality of the experience of all Southerners -- black, white and, if you will, green. WG

Below, Irish-American re-enactors portray color guards from the Union and Confederate armies before the reviewing stand during Dublin's St. Patrick's Day Parade in 1992. The Confederate re-enactors carry a replica of the Confederacy's first national flag. The award-winning Old Bethpage Village Brass Band brings up the rear. WG Archives 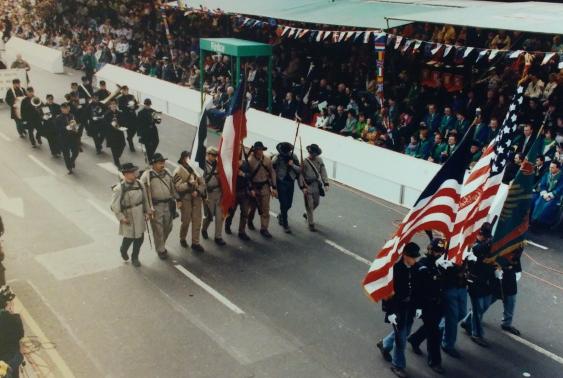 The Confederate Monument Issue: Is it Pride or Prejudice?

Cleburne: The Defense of Ringgold Gap