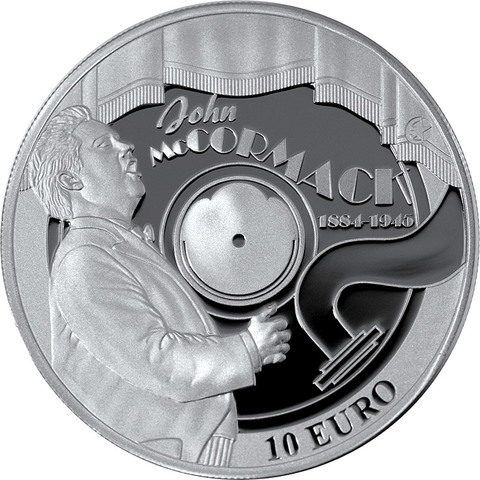 So you have always told your wide-eyed, disbelieving grand-children that those scratchy 78's you have carefully stored in the attic would some day be worth money, y'know, the ones that you have been collecting for years at 'garage sales' and storage-lot auctions? Well they just got a welcome boost in value, because one of the most prolific stars of the 1920's and 1930's has just been honored by Ireland.

Ireland's most famous tenor, Count John McCormack, has been honored with his very own €10 coin by the Irish Central Bank. But you'd better hurry as they only minted 8,000 of them and they will soon be collectors items in Ireland, UK and especially America where amongst others, he was  the darling of the homesick Irish and Italian emigrant diaspora.

Born in Athlone, in 1884, the 4th of 11 children, his talent for singing, especially opera, propelled him to the international stage. An early adopter of the new 'gramaphone' technology, John McCormack went on the achieve super-star status as an operatic tenor, singing all the major operas to popular acclaim, but he was latterly more famous for his renditions of many Irish favourites including 'I hear you calling me', 'The Last Rose of Summer', 'The wearing of the green', 'Macushla,' 'Molly Bawn' and 'Long way to Tipperary' amongst other extraordinary popular hits. His recordings of Moores Melodies made him a household name across the globe.

In real terms this unlikely post-famine child prodigy became a millionaire, owning homes in London, New York, California, and Dublin. However he was ever generous with his time and his money. He volunteered for the war effort in WWI and WWII and his popularity never waned, even after his death in Dublin in September 1945.

His €10 coin details can be found here.

And some details on his extraordinary life and career can be found here.

I am often asked by American visitors who take my Walking Tour  of Galway( www.galwaywalks.com ) if there is any Count McCormack Museum in Ireland. After all many of our American visitors grew up with a stack of 78′s in their house and a father whose party piece was ‘The Wearing of the Green’. Alas, there is currently no museum to Papal Count, Irish and world famous tenor, John McCormack anywhere in Ireland, not even in his home town of Athlone. There is a plaque to him on the house he was born in, in Athlone town, and of course a lovely memorial stone at his grave in Deansgrange Cemetry, in Dublin. Perhaps this newly minted coin will help change all that.

So, yes, do continue to tell your grand-children that those curious grooved black discs gathering dust up in your attic are indeed valuable, a living piece of Ireland’s glorious history. Now as for playing them, where does one get a 78rpm record player these days? I know where there are several, in O’Connors Famous Pub in Salthill, Galway, where I give my ‘Fifty Foot Tour of Ireland’ amongst the hundreds of antiques in the pub. Join me for a walk into the past if you find yourself in Galway any evening in the summer. http://www.galwaywalks.com/#!tours/c18h9

Brian.  I feel like I know you!.  I am a faithful listener to Diane Byrnes on Echoes of Erin and we heard wonderful tales about your tour that you took the group on this past year.

I was raised in Scotland by my Irish granny. (Mary Grue from Armagh) who brought me up singing all the Irish songs particularly rebel songs from the likes of John Mc Cormick, Sydney McKeon. I must say the two youngest members of my children, Fran and John, have kept up their love of anything Irish. It could also be because my cousin's wife (Maura Meehan) was shot and killed in Belfast in 1971. We had already emigrated to Australia by then, but the tragedy really hurt. I lost touch with relatives in Belfast until very recently when my daughter Frances discovered them again for me, and the family are still hurting. Does it ever stop.? ps. Hubbie and I spent ten days in Galway in 2008. Loved the place and hope to revisit this year sometime in June. Mary McGinnis

Mary.  So sorry for your family's loss.  So many  people still hurting.  These tragedies have to be resolved.

Thanks everyone for your comments...hey, I just write the words, and love doing so, but the best bit for me is the feedback. Thanks for that. And yes, if you are in Galway, I am easy to find ...and good company too. Looking forward to meeting you Mary in June. Brian