The Story of the Gallowglasses 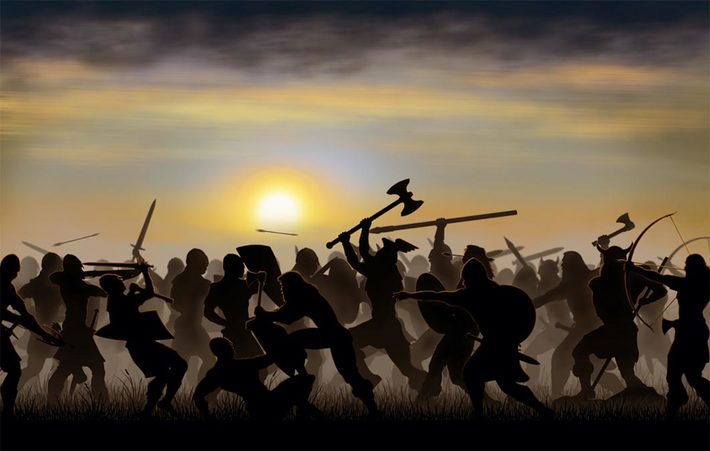 The ‘Gallowglass’ as they were called, were elite mercenary warriors and members of the Gaelic clans of Scotland. They came to prominence between the mid 13th century and late 16th century. As Gaels, they shared a common background and language with the Irish, but as they had intermarried with the Vikings, the Irish Gaels nicknamed them ‘Gall Gaeil’ meaning ‘foreign Gaels.’ The gallowglass came from the western coast of Scotland, principally Argyll and the Western Isles although some could be found in the Norse settlements in Ulster as well. 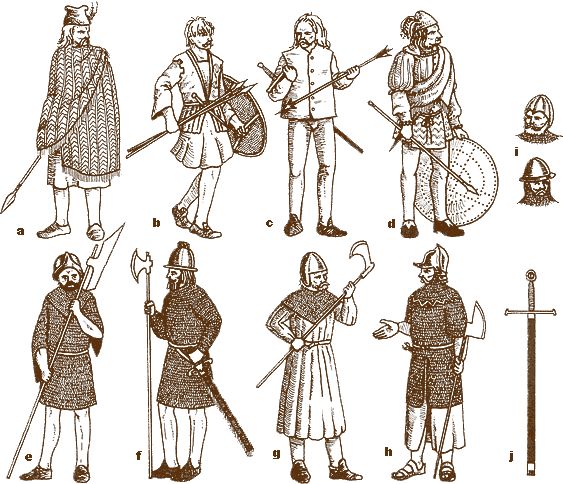 Large numbers of gallowglass settled in Ireland after losing their land and property during the Scottish Independence wars. Many of the Irish Chieftains gave them shelter and land in exchange for their promise of future military service. An early family of gallowglasses was the MacSweeneys, settled by the O'Donnells in north Donegal. These were followed by MacDonnells, MacCabes and several other groups settled by powerful Irish nobles in different areas. The gallowglasses were a heavily armored, trained infantry to be relied upon as a strong defence for holding a position, unlike most Irish foot soldiers, who were less well armored than the typical Irish noble who fought as cavalry. Soon most gallowglasses were native Irish, and the term came to mean a type of warrior, rather than any ethnic designation. They were a significant part of Irish infantry before the advent of gunpowder and depended upon seasonal service with Irish chieftains. A military leader would often choose a gallowglass to serve as his personal aide and bodyguard because, as a foreigner, the gallowglass would be less subject to local feuds and influences. 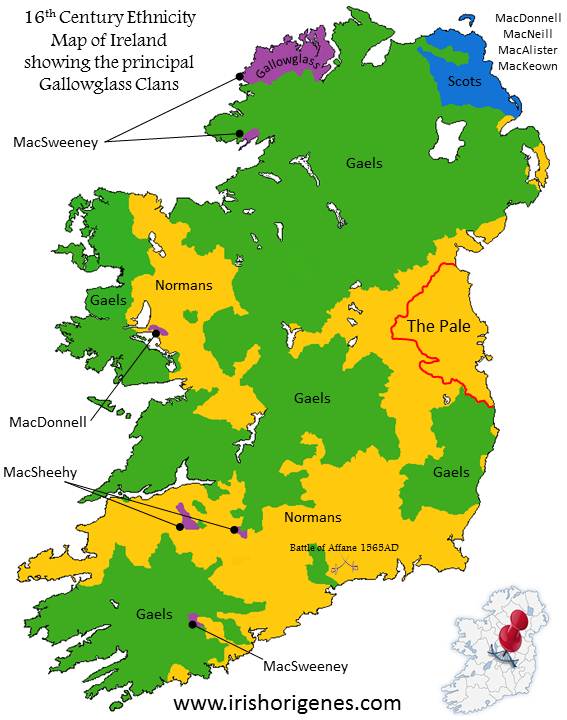 They were a well-trained, well-armed and disciplined infantry and had always proven themselves to be strong defenders of their positions, and utterly fearless. In battle they used the two handed sparth axe, a claymore, several throwing spears and at least one dagger. Each warrior had two young squires in attendance to carry provisions and maintain weapons. They wore iron helmets and body armor that consisted of chain mail on top of heavy, padded jackets. They formed in groups of one hundred men called ‘Corrughadh’, similar to the system employed by the Roman legions.

The first record of gallowglass service was in 1259, when Aedh Ó Conchobair, King of Connacht, received a dowry of 160 Scottish warriors from the daughter of Dubhghall mac Ruaidhri, the King of the Hebrides. With the aid of companies of gallowglass, an uprising in Ireland in 1261 defeated the Normans in Kerry and with their assistance in 1270 the O’Connor clan routed the Normans from Connaught. In 1274 Wicklow had also been recaptured and by the beginning of the fourteenth century many areas of the country were once again in the hands of the Irish noblemen. In 1296, the Norman king, Edward 1st of England, in an unprecedented move, invaded Scotland. After a series of violent and savage battles, his armies took control and eventually ruled Scotland for ten years. Edward further incurred the wrath of the Scottish people when he removed and brought the ‘Stone of Scone’ back to England. The ancient stone, the seat and symbol of Scottish power, was used in the coronation ceremonies of all Scottish kings, and considered a treasure of the Scottish Royal family. It was kept by England for seven hundred years and only returned in 1996. The theft of the ‘Stone of Scone’ was the last straw and set in motion a plot to regain Scottish independence. When Edward Bruce came to Ireland to claim Kingship in 1315 he was accompanied by a great force of the Gallowglasses. The other Irish kings also started to hire the fierce Scottish warriors who spoke their language and shared similar customs. Not only would the Irish Kings use the Gallowglasses in battles against the Norman English but they also used them in feuds against other Irish Kings. 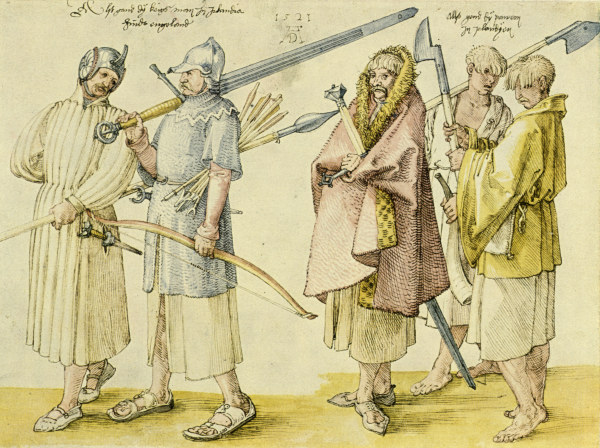 In 1569, Turlough Luineach O'Neill (the O'Neill) married Lady Agnes Campbell, daughter of Colin Campbell, 3rd Earl of Argyll, and widow of James MacDonald, 6th of Dunnyveg. Her dowry consisted of at least 1,200 gallowglass fighters. Along with two young men as support and friends on top to assist or fight this could easily have numbered over 5,000 current and future gallowglasses coming into the area. By 1512, there were reported to be fifty-nine groups throughout the country under the control of the Irish nobility. Though initially they were mercenaries, over time they settled and their ranks became filled with both Scots-Norse and many native Irish men. A military leader would often choose a gallowglass to serve as his personal aide and bodyguard because, as a foreigner, the gallowglass would be less subject to local feuds and influences.

The importation of gallowglasses into Ireland was a major factor in containing the Anglo-Norman invasion of the 12th century, as their ranks stiffened the resistance of the Irish lordships. Throughout the Middle Ages in Ireland, gallowglass troops were maintained by Gaelic Irish and Hiberno-Norman lords alike. Even the English Lord Deputy of Ireland usually kept a company of them in his service. In return for military service, gallowglass contingents were given land and settled in Irish lordships, where they were entitled to receive supplies from the local population. They were noted for wielding the massive two-handed sparth axe (a custom noted by Geraldus Cambrensis, to have derived from their Norse heritage) and broadsword or claymore ("claidheamh mór"). For amour, the gallowglass wore a mail shirt over a padded jacket and an iron helmet; he was usually accompanied by two boys (like a knight's squires), one of whom carried his throwing spears while the other carried his provisions. 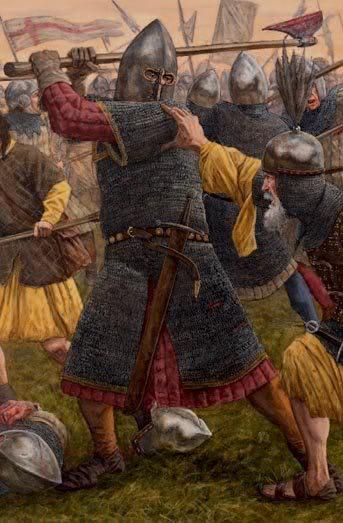 In a paper entitled "A Description of the Power of Irishmen", written early in the 16th century, the Irish forces of Leinster are numbered at 522 horse, five battalions of gallowglass and 1,432 ‘kern’ (a light-armed Irish foot soldier)  and those of the other provinces were in like proportion. Mac Cárthaigh Mór commanded 40 horse, two battalions of gallowglass, and 2,000 ‘kern’; the Earl of Desmond 400 horse, three battalions of gallowglass, and 3,000 ‘kern’, besides a battalion of crossbowmen and gunners, the smaller chieftains supplying each their quota of men. Every ‘kern’ had a bow, a ‘skieve’ or quiver full of arrows, three spears, a sword, and a skene (dagger) each two of them having a lad to carry their weapons. The horsemen had two horses apiece, some three, the second bearing the ‘knave’ or his attendant.

The 16th century in Ireland saw an escalation in military conflict, caused by the Tudor conquest. Gallowglass fighters were joined by native Irish mercenaries called ‘buanadha’ meaning quartered men and by newer Scottish mercenaries known as ‘redshanks’ so named because of the untanned deer leather buckskins they wore which had a reddish tint. Eventually, the flow of mercenaries into Ireland was such a threat to English occupation that Queen Elizabeth I took steps against them when she had  around 700 of them were executed after the first of the Desmond Rebellions. 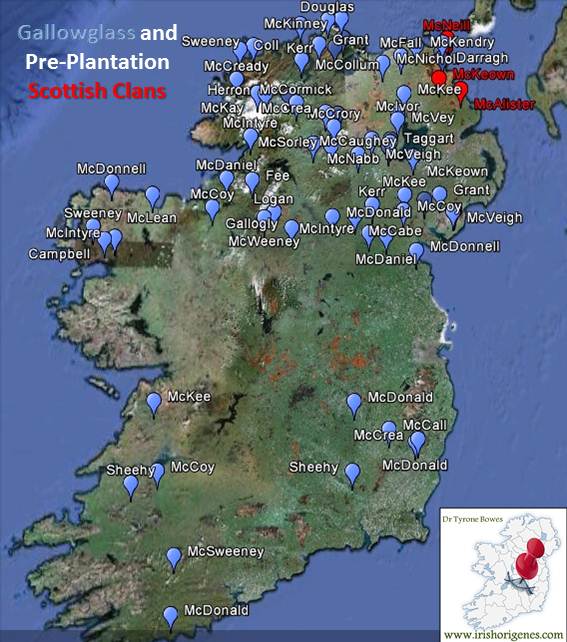 Despite the increased use of firearms in the 1600’s in Irish warfare, gallowglasses remained an important part of Hugh Ó Neill's forces in the Nine Years' War. After the combined Irish defeat at the Battle of Kinsale in 1601, recruitment of gallowglasses waned, although Scottish Highland mercenaries continued to come to Ireland until the 1640s (notably Alasdair Mac Colla). They fought under the Irish general Eoin Roe O'Neill at the Battle of Benburb when O'Neill had an overwhelming victory in 1646. The gallowglasses of the Mac Cárthaigh Riabhaigh are recorded as having attacked Mallow in County Cork as late as 1645. Images of gallowglasses fighting as mercenaries in European mainland armies were sketched by the artist Dürer in 1521 and later by French and Dutch artists. Gallowglasses served in the Dutch Blue Guards, Swiss Guard, the French Scottish Guard, and the forces of King Gustavus Adolphus of Sweden in his invasion of Livonia during the Thirty Years' War.

The story of the Gallowglass was enormously interesting,one I’d never heard before..
such a number I never envisaged .
Elizabeth 1 killing numbers in their hundreds astounded me .A very cruel world .
One victory however long it took was the handing back of Kinsale recently.
Great work.

Thanks Rosie. It is a fascinating story. Tanks for reading.