How Can People be This Awful?

It's amazing to me in a nation of just 4.5 million people that there can be THIS many horrible people who don't give a second thought to causing the slow, agonising, painful, and torturous death of their own animals.

Here's the latest case highlighted by the ISPCA just today:

ISPCA Inspector Lisa O’Donovan responded to a call regarding a pony stuck in a bog. On arrival at the location in a marshy area of Cork city suburb,  she found a young pony half submerged in muddy water. Initially it appeared that the animal had died but as the Inspector went closer she could see that is was still breathing. 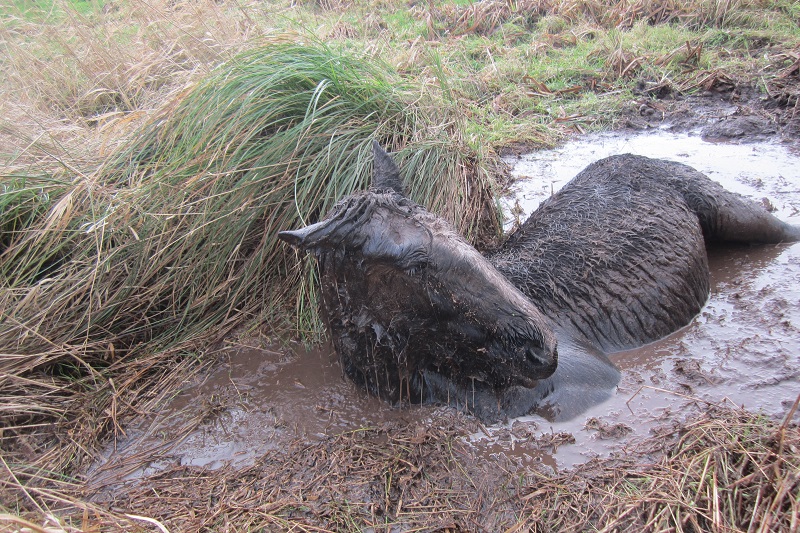 The local Equine Veterinary surgeon was called to the scene. But the assessment of the situation was grim. Local enquiries suggested she had been stuck in that position for a minimum of four days. Her body was weak and she could barely raise her head. “Even if we had succeeded in pulling her out,” stated Lisa, “The area is dangerous and impossible to get a horse box into. There was a steep incline which meant we would have had to get her somewhat on her feet. The vet felt that it was going to add to the horrific suffering she had already endured. “

The difficult decision to humanly end her suffering was reached.“It’s a terribly sad end to this animals life. We cannot even begin to imagine what she had suffered. We had to be realistic from her point of view as to what was the best option for her. While we have successfully removed horses from similar situations  in the past, this unfortunately was not an option for her. The animals welfare is paramount, and we must ensure that they do not suffer  anymore then they have to once we arrive.”

It is beyond comprehension, but you know, others treat huiman beings the same way. Take for example children throwing newborns in a trash can or toliet, people looking the other way as a viloent act takes place seemlingly not want to get involved. Icould go on and on and I know many of  the readers will chime in as well. I want to think that there is good in everyone, but I am usually disappointed by many. However, I will not give up on humanity and always do my part, regardless how small it may be, to do what is morally right!

There is good in everyone, Danny ... at least initially.  Unfortunately, an alarmingly large number of people have, by their own devices, choked that good out of their own lives completely (or almost completely).  We make choices every day, and some people have made so many wicked choices for so long that they have killed what was once good inside them.

It's a scary story, and unfortunately it's a true story as well.

Sadly, AHAR also responded...to a donkey which had been stuck in a mud hole... The owner scooped it out with a tractor and shovel...with little care given to the puncture wounds

This was life or death and time was against AHAR. He was stuck in a deep hole of mud for at least two days. They dropped everything when they got the call. The crows had tried to eat him alive, skin and hair torn off his back. You can see by Dannys face, this was serious. He needed to fight hard to live. Sadly, wee Leon, as AHAR christened him, succumbed to his injuries

Seeing this makes me want to physically hurt the people who can do this.  I have to restrain myself.  But until the Irish government / law enforcement starts giving a lick about these unfathomably terrible cases, this will continue and likely increase in frequency.  People who are devious enough to allow animals to suffer agonising and painful deaths of starvation and exposure are not fit to live among the rest of us who possess hearts inclined toward the well being of other living beings.

In working closely with AHAR...even from this great distance... my heart has been shattered time & again...I am trying to juxtapose the Ireland of my youth and young adulthood with this new, more seemingly callous one.

I know that it isn't all Irish that treat their animals harshly. Still, I am taken aback by the indifference that seems to be gaining more of a prevalence.

In the Boom days, it was a sign of your success that horse in your paddock or three in your pasture. Now that the Boom has burst, people are left wondering what to do with these expensive "toys".

That is still no excuse for leaving them to starve and rot. How awful a death, especially in the storms here of late.

Just this past few days, I have been trying to help a friend outside of Dublin. In their walks, they came across a horse, dead in a field next to the race course in Balydoyle. He tried for days to bring it to someone's attention. It is finally removed but only after several Facebook posts and a slew of people email Fingal council people, my contacting AHAR and their contacting of a local Animal Welfare Veternarian. The video posted by my friend, himself a vounteer in small animal rescue, was just heartbreaking.

Yes, Bit ... the prevalence of this deplorable nonsense is alarming.  I swear, based on what I see just from the animal welfare charities I follow on Facebook (which is only a fraction of the ones in operation in Ireland), it must be one in ten people in Ireland who are neglecting animals and letting them die horrible deaths.  I kid you not.  That might sound unlikely, but I'm telling you ... it's everywhere.

They do their best to help what they can...and mourn each death as if it was a child of their own creation

My Sweetheart knows that shoudl we ever hit the lotto, my first action will be to expand their center and make it state of the art

Heritage PartnerPermalink Reply by ISLE magazine on August 1, 2014 at 4:24am

It is a very dire situation here in Ireland and it breaks my heart as well. There are some regulations here that make it very difficult to make changes. Many horses are turned out into the countryside. It is hard to round them up and when and if they are rounded up unless they are microchipped they cannot be put down (and of course I'm not an advocate of this, however, the situation is so bad that many of them need to be for humane purposes). It costs money to microchip them and the government cannot afford to do that and to top it off there are no facilities in the Republic for disposing of them properly. When and if they are rounded up - people come and take the healthiest animals and then again turn them out into fields again. It is a vicious cycle and very very sad and thankfully there are many people doing the best they can but when humans are struggling to survive here in the recession - animals unfortunately do not come high on the list of priorities.

I've volunteered some of my time, talent, and resources to a few of the horse charities in Ireland, and there are some people doing amazing and selfless work to "clean up" the mess so many heartless / selfish people have created.

Here's the thing: If the government would actually make the penalty for animal abuse / neglect a deterrent, and then if they'd actually enforce those penalties, we'd see a DRAMATIC drop in these cases of disgusting abuse and neglect.  That's all it would take to make a HUGE difference, and that doesn't cost the government / taxpayer anything.

But no, they don't care enough to do even that.  Can't tell you all the examples I've seen / heard of in the past couple years of people doing unimaginably terrible things to animals, and there's never any kind of legitimate punishment for it.  So here's the message: "Abuse an neglect animals to deplorable levels, and you'll not be punished in any real way."  So why should we be surprised when it continues to happen?

It's somewhat akin to littering laws in Ireland (something else I'm passionate about).  While it's a much worse thing to mistreat an animal, I think we're seeing the same things with littering (i.e. the government not caring enough to enforce the laws / fines already on the books).  In this case, there already exist sufficient laws and fines to help correct the problem ... it's just that they're almost never enforced.  So why would people who don't care about their city looking like a trash heap stop littering?  Until the authorities make it hurt, these folks will never stop using public footpaths as their rubbish bins.

Littering & Animal dumping... not too far apart... For some an animal is a commodity...and, when it is no longer useful, no thought is given to tossing it aside much as they would a used up pop bottle or any other piece of trash tossed from a car window...

Susan and the rest at AHAR see an upswing in Spring just before foaling time... They've quite a few foals in the barn at the moment

You are correct that stricter laws need to be put in place AND enforced... That is the stickery wicket...Enforcement... Many times, AHAR will find the original owners...who will belligerently ask "What of it?"... Gardai are called, a promised is elicited from the owner that they will NEVER do this again... and with a wink & a nudge... all is forgiven