We're highlighting some of the great romances in Irish history during our Grá XOXO campaign this Valentine's season; but it's likely that some of the greatest Irish love stories are ones most people have never heard.  True stories of love and romance aren't only for the rich and famous.

We're asking you to share with The Wild Geese community your own great Irish love stories.  Maybe it's a story from one of your ancestors, or perhaps its your own love story.  We'd love to hear it and add it to the catalog of inspiring tales of true love. 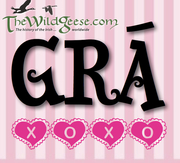 I don't prsonally have an Irish story but I think the greatest one in Irish history is that of Robert Emmet and Anne Devlin.  Not a romantic love but one of devotion and dedication not only to the man but to a cause..   She was jailed for refusing to give information about Emmet  and spent three years in a rodent infested , windowless cell and was subjected to torture by a sadistic warder with very little to eat because she wouldn't give up Emmet's co-conspirators. Hers was a hard and dreary life when she could have accepted large sums of money if she had cooperated.  She died  sick and in poverty

Great point, Jean.  Mike McCormack has just posted a lovely article about Emmet and his love, Sarah Curran.  In the article, he does make reference to Anne Devlin:

Permalink Reply by Tom O Connor on January 30, 2014 at 6:59am
The‘Exile of the Sons of Uisnech’ saga retails Ireland’s most poignant love story ever, that of Derdriu and Noisiu, and its connection with Queen Maeve.
Yeats noted that Queen Maeve’s “lovers are beyond counting.” The literature invariably portrays her as a great manipulator of men, adept at power and intrigue. She is said to have boasted that she never had one man without another waiting in the shadow. Is it true that she chose one husband after another and let her new favourite kill the old one in single combat? Not very romantic, is it? Was all this really true?

Has medieval Ireland’s academia surrendered the majestic high status and noble character of Celtic queens and Celtic women in general to the prurient whims of greedy royalty-patronising pseudo-historians? O Tuathaig referred to the “significant and understandably urgent demand of feminist historians for the reclamation of the place and perspective of women in Irish history.” What have they to say about Maeve?

Permalink Reply by Tom O Connor on February 7, 2014 at 4:02am
The poignant ‘Exile of the Sons of Uisnech’ Iron Age saga tells of Ulstermen celebrating with Fedlimid Mac Doill, Conor Mac Nessa’s poet and storyteller, when Fedlimid’s wife gave birth to a baby girl. When it cried out, Conor’s driud, Cabhad, prophesied that the baby would be exceptionally beautiful with golden yellow hair and stunning grey-green eyes. The delight of the guests was dissipated when his prophecy foretold that, because of her great beauty and the intense jealousy it would elicit, she would be a woman over whom there would be great slaughter among the chariot-warriors of Ulster, resulting in terrible suffering and countless graves. He named her Derdriu. Because of the prophecy, Ulster’s young warriors wanted to have her slain. “No” said Conor Mac Nessa who decreed that she should live: “I will rear her as I see fit and I will marry her when she comes of age.” No one dared oppose him.

Derdriu was reared in strict seclusion by a foster-mother, Leborcham, until she was by far the most beautiful woman in the Western world. One day as her foster-father flayed a calf for her meal, she saw a raven drink the blood on the snow. She remarked “I could love a man with these three colours, hair like a raven, cheeks red like blood, body white as snow.” “Lucky are you” said Leborcham “for such a man lives nearby, Noisiu, one of three brothers, the sons of Uisnech.” Derdriu said “I will be ill and pine and die unless I see him.” She stole out to see him as he rode through the woods. He was all she desired. They fell instantly in love. Even though he found her stunningly beautiful, Noisiu was reluctant to get involved, knowing of Conor’s plans and the prophecy of Cabhad. But she finally persuaded Noisiu to elope with her.

Knowing that Conor would hunt the length and breadth of Ireland for them, Noisiu and his two brothers fled with Derdriu to Scotland. Her beauty attracted the attention of the men of Scotland. Due to constant harassment they had to be on the move until they set up home in Glen Etive. Conor Mac Nessa was furious and sought to apprehend them. He was finally coaxed to call a truce and beg the fugitives to return to Ulster. “Let them come home,” he said, “let guarantors be sent to them.” Fergus Mac Róich, Dubthach and Conor’s own son Cormac agreed to guarantee their safety. However, when Derdriu, Noisiu and his brothers arrived, Conor Mac Nessa reneged on his guaranty and had the three sons of Uisnech assassinated by Eoghan Mac Durthacht and his men. One of Fergus’s sons was slain whilst trying to protect Noisiu. Derdriu was taken to Conor’s palace, her hands tied behind her back.

Outraged by this gross treachery, Fergus, Dubthach and Cormac attacked Conor’s palace, killing 300 men including his son Mane and grandson Fiachna. They burned Emain Macha palace. Not only Queen Medb hated Conor now. Derdriu spent her time pining away, grieving, and never once raising her head from her knee. Her lament over Noisiu’s death is the masterpiece of early Irish tragic verse often rewritten by Irish scribes.

Annoyed, Conor asked her what she disliked most. “It is you yourself and Eoghan who slew Noisiu” she cried. Thereupon, Conor decreed that since she had spent a year with him, she would spend the next year with Eoghan. While being taken to Eoghan, she threw herself from the chariot, dashing her brains out against a great rock. Soon thereafter Fergus Mac Róich, Dubthach and Cormac son of Conor Mac Nessa, left Ulster and defected to Queen Medb in Connacht, the arch-enemy of Conor Mac Nessa, with 3000 of their followers.

1957: A very handsome, very Irish, young man was home from basic training.  He sported the really curly hair, the wonderful twinkle in those Irish eyes, the easy smile, and yes, even the dimple in the chin. He'd broken with his girlfriend and was about to be deployed to Korea for about a year and a half.  His good friend kept after him and eventually persuaded him to go to a YWCA dance. It was Saturday night and Monday he was to ship out.

She went to said dance with her sister and her cousin. She being only 1/4 Irish, possibly most of that Irish concentrated in her very red hair. He spotted her red hair right away, but being shy (so he says) asked another girl to dance. Miss "Another" was waiting for someone and he suddenly felt the confidence the Army had given him and asked her to dance.  She noticed he was really nice, really good looking and really"comfortable" They stayed  with each other throughout the evening.  Upon leaving the dance, he helped her on with her heavy coat and remarked, "What is this, a penance?" That little joke impressed her as clever, funny, cute, and informed.  She instantly knew this Irish lad was special.  They went elsewhere with the group, even pulling off a joke on her younger sister, without a word, working perfectly together.  She noticed that. Another positive sign. They parted as soon as each could bear: 5 am, exchanging addresses.  On Sunday he needed to see her again.  He only had her home address--50 miles away.  Fortunately he knew her cousin's name started with a B and he set out to search the phone book until he found a"B" in her cousins' town.  'Tis lucky for him it was a "B" and the hometown was tiny. We'll never know if a letter further back in the alphabet would've discouraged him.  He drove to get her, and they spent the afternoon together. He took her home and introduced her to his Mom. On Monday he left. She didn't know his last name.  Upon meeting she'd asked 3 times and each time the band got loud and she couldn't hear him.  She was too embarrassed to ask again. She felt that she'd get his name off his letter, should he actually write.  Well, he did write--a post card from Chicago.  It was signed "Tom." No last name.  Her overprotective father didn't respond well to this--saying that "he thinks he's the only Tom in the world".  He was, as far as she was concerned.  He called from the west coast, protective father wasn't happy about that either.  He shipped out.  She wrote him every day, no matter what.  That exchange of letters, without the distraction of a movie or sporting or any event for that matter, allowed them to express their feelings, beliefs, thoughts, concerns. Eventually the long separation came to an end and feelings never changed. She had been dating but by the second date was seeing only Tom. There was 50 miles between them and he came up on weekends and in the middle of the week.  One evening he said they "had to get married".  She was confused, as that expression used to mean the woman was pregnant and she knew that wasn't so.  He explained he'd run off the road having fallen asleep at the wheel.  Woke up noting mailboxes on his left.  A little airborne at times, he got back on the road with only a radiator leak.  The winter was cold, his car heater didn't work.  No, they did "have to get married" for his survival.  Marry they did, within the next seven years there were 6 little ones--one year off for his spinal surgery.  Today the marriage has lasted 55 3/4 years, produced 6 children, 12 grand children and 2 1/4 great grandchildren.  Every night when they go to bed, she cuddles up and and tells him, "I just love this." It always gets a laugh.  Everyday they marvel at their good luck.  Often I think, I love him more today than yesterday.

Even the 'old tales' can't beat this.  What a beautiful life.  Many more to you both.