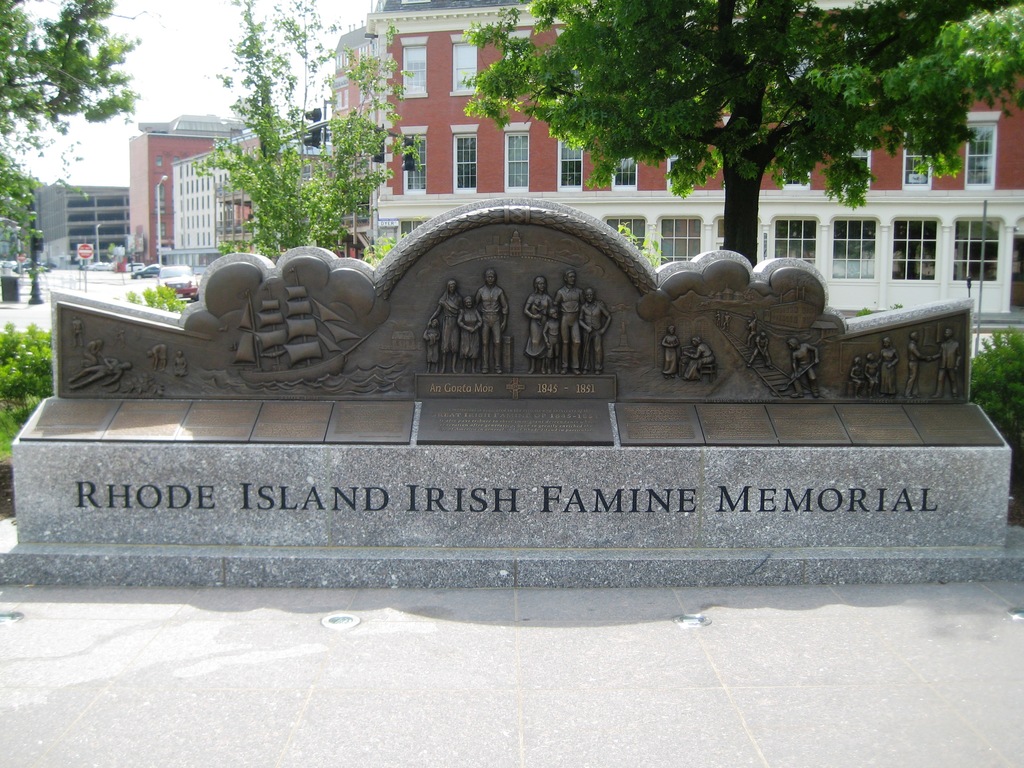 By 1870, Rhode Island had one of the largest percentages of Irish living in its cities and towns of any state in the Union. If you share that heritage, or have stories, we need to talk.

Ray, how about starting a group

I like that, Belinda. What do you have in mind? How should I do it?

Belinda, how does one set up a group?

My great-great grandfather was born in Ireland and came to the US in the 1840-1850's time frame. He lived in North Smithfield and worked in the mills as a manager before enlisting at 32 into the 20th Massachusetts Regiment in 1861. This famous regiment saw plenty of action in many major battles. He was wounded at Gettysburg by the copse of trees and was taken prisoner in the Battle of the Wilderness. He ended up in Andersonville POW camp where he died of disease in 1864. He also lived in New Bedford, MA again working in the mills.

There must be quite a few interesting stories to share, particularly among those of us old enough to remember our family members who were born in Ireland and the stories they passed on to us.   I'm 81 and all my grandparents or great grandparents came from Ireland starting in the 1840s-1850s although my grandmother Conway didn't come over from Mayo until 1888.   Some stated out in Valley Falls, Woonsocket (then Cumberland), North Smithfield, Blackstone, MA working in the mills or as laborers to support younger family members through day school or night school seeking improvement for the family and community.   My great grandfather Dwyer served one enlistment under his own name (1st RI Light Artillery), another as a replacement for a Yankee farmer's son and a third under an assumed name for the bonuses.   He was captured during the Peninsular Campaign and was held in Libby Prison in Richmond.   I occasionally get back to RI and always go through St. Charles and St. Paul's cemeteries just over the line in E. Blackstone, MA. where the old headstones and supporting records are like a history of the early Irish communities In Blackstone and Woonsocket.  Have you checked out the Web site, Southern New England Irish?

What have you written on your ancestor? Looking for someone to tell the story?

Here is my blog. http://federal-hill-irish.blogspot.com/

I know Southern NE Irish, but have not visited the two cemeteries that you mention. I will go there soon.

I haven't concentrated on any particular ancestor's personal history, but have mainly traced their origins back to the original townland for each where possible.   Given the paucity of records prior to 1864 in Ireland it can be hit or miss in some cases; success in others.  I guess I've been focused on identifying ancestors across the pond when more recent individual antecedents deserve at least as much attention.

However, you've stimulated my interest in revisiting some old research from my early days of genealogical inquiry when I lived and worked in RI and had access to original source materials.  I regret that the family story tellers are now long gone, so perhaps this old geezer should focus on some individuals from my past who may be worthy of mention with a few lines of their personal history in memoriam as well as tracing their origins.

Our ancestors generally had pride in their origins as evidenced by some of the gravestone inscriptions that proclaimed their homeland, e.g., " ...Native of the Parish of Clonaulty, Co. Tipperary".   Often certain sections of a cemetery would demonstrate that the deceased in that section were either related by blood or marriage or at least from the same townland, parish or county in Ireland.  In that regard, there was often a strong bond between natives of a certain county as I recall from one family anecdote about a cousin with Tipperary origins (name witheld) who, upon reaching his limit at Corbett's in Blackstone, would accept help only after asking, "Am I on a Tip's back?".

Thanks for initiating a worthy forum for recording a common heritage that deserves some human vignettes to embellish the social phenomenon that shaped modern Rhode Island and Southeastern Massachusetts.

Jim, what was his name? Where in Ireland was he from?

On my blog, I have a story of another Irish boy who died at Andersonville. John McKenna from the North End of Providence and before that from County Tyrone, was the man. Here is my blog. You will have to dig several pages in to find the story.

Have you written about you gg gr? Is there a story to be told? What info do you have?

Hi Ray, Sorry so long to reply. His name was Luke Miller and he was from Sligo. I found him by chance when my brother and I got interested in the Civil War. Thinking we were first or second generation Americans on both our parents sides, we didn't think we stood much chance in having anyone related that could have served during the war, I looked in the family bible and found some information that hinted perhaps on my mother's side there was someone. It didn't take much to discover Luke and I also found my interests in genealogy and in Civil War history, I've gotten his military records from Massachusetts records and read every book I could find on his regiment (20th Mass) and pieced things together. If I could find more time perhaps I can find more information. Coincidentally, my dad's side is French Canadian and have found that at certain times, his family and my mom's side have lived blocks apart but they never met until he was in a VA hospital after WWII. I think there might be a good story here as he was 32 when he enlisted and went back to his regiment after he was wounded at Gettysburg (and taking a cut in rank).

Permalink Reply by Joseph Michael Lenihan on March 25, 2014 at 4:37pm
Ray: I think you know a great deal about the family we share. What did you have in mind? Mike