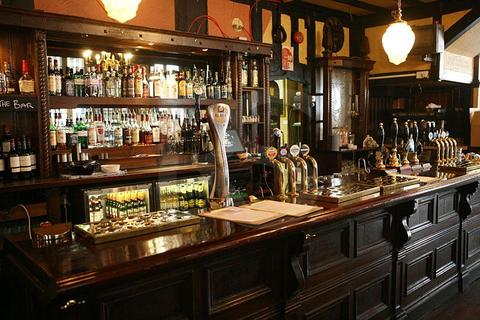 This announcement has made waves among some in the Irish community (both at home and abroad). Many are saying the cold, character-lacking nature of chain pubs will have a negative impact on the traditional independent pubs around Ireland.  On the other side, some are saying Wetherspoon's more reasonably priced pints and such will introduce much-needed competition to the independent publicans around Ireland who feel too comfortable charging nearly double what a chain pub like Wetherspoon would.

Interestingly enough, shortly after Wetherspoon announced its intention to enter the Irish market, another British pub chain giant, Greene King (which operates more than 1,000 pubs) threw their hat into the ring as well.  Is this the beginning of a tidal wave of British chain pubs in Ireland?

A Facebook page which ... um ... "encourages" Wetherspoon to reconsider has been set-up and as of the time of this discussion being posted has more than 2,200 "likes."

It's an interesting debate.  Where do you come down on this?

Bring back the SIbin.

or the secret knock.

we already have plenty of drinking emporiums otherwise known as superpubs. Wetherspoon will attract a certain kind of customer. Whats authentically Irish about the pubs of Temple Bar?

Irish publicans are a powerful lobby with several politicians owning pubs so I am sure any chance of competition will be challenged and and restricted like no happy hour.

Let's coin a new term based on http://en.wikipedia.org/wiki/Plastic_Paddy and call them Plastic Pubbies

The food is another point . Oliver St John Gogarty in Temple Bar charges a small fortune for peasant food such as Irish stew.

Different people have different expectations of an Irish pub. I also work as a tourguide and the clients often ask me to find them an authentic cosy Irish pub with seating for a  hundred people.

I hope the chains don't wipe out the small struggling pubs because they won't be able to compete with their prices.

i don't think they will. They are pubs for different tastes. These british chains are aimed at younger drinkers. I wouldn't be seen dead in a  superpub.

if pubs are struggling then the onus is on the publican to do something about it. He can bitch to Joe Duffy on liveline about the terrible state of the country or have special offers and organise bingo evenings. small country pubs in villages of fifty inhabitants are unlikely to be busy at the best of times  and tend to only open in the evening. The drink driving laws have changed things but should country dwellers be allowed to drive under the influence of alcohol? Again some publicans overcame this by driving their loyal customers home. Its give and take not just take.

As a non-drinker for the last 25 years (sad indeed), but necessitated by the unbearable hangover I experienced the day after drinking two glasses of dry white wine (!), I am no expert on the topic of alcohol. However, I would be interested in the effect this would have on the sales of Guinness. It seems rather ironic that the traditional Irish pubs are under threat by British chain pubs, Comments from members above are varied and interesting, but I must admit that I found Belinda and Ronans replies, short, sweet and wonderfully tongue-in-cheek!

I ate at many JD Wetherspoon pubs when I was in UK (2007).  It is anything but a pub.  The food is great and much cheaper when paying in GBP for travelers.  You will never have any kind of pub feel there.  No intimate music from the band just a few tables over.  It is more like a giant noisy cafeteria that seats hundreds.  It may go over in Dublin, but I doubt it will ever catch on in a big way in ROI.  Just my opinion.

Good to know, James.  Sounds like a win-win then, perhaps.  Good food at good prices (which is like finding hens' teeth in Ireland), but evidently not trying to be an Irish pub in the traditional sense.