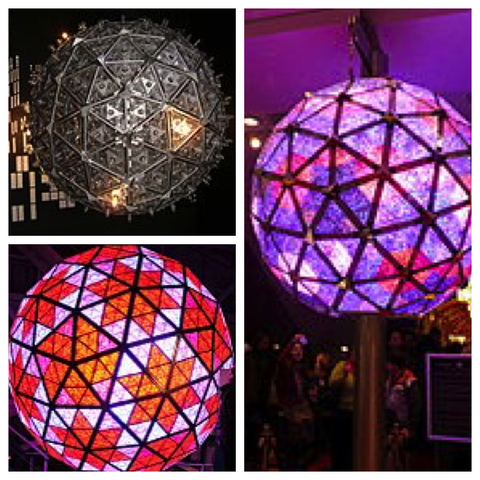 On December 28, 1998, during a press conference attended by New York City mayor Rudy Giuliani, organizers announced that the third ball would be retired for the arrival of the new millennium, and replaced by a new design constructed by Waterford Crystal. The year 2000 celebrations would also introduce more prominent sponsorship to the drop; companies such as Discover Card, Korbel Champagne, and Panasonic were announced as official sponsors of the festivities in Times Square. The city also announced that Ron Silver would lead a committee known as "NYC 2000", to be in charge of organizing events across New York City for the year 2000 celebrations, particularly outside of Times Square. A full day of festivities was held at Times Square to celebrate the arrival of the year 2000, which included concerts and hourly cultural presentations with parades of puppets designed by Michael Curry, representing countries entering the new year at that hour. Organizers expected a total attendance exceeding 2 million spectators. The fourth ball, measuring 6 feet (1.8 m) in diameter and weighing 1,070 pounds (490 kg), incorporated a total of over 600 halogen bulbs, 504 Waterford Crystal triangles, 96 strobe lights, and spinning, pyramid-shaped mirrors. The ball was constructed at Waterford's factory in Ireland, and was then shipped to New York City, where the lighting system and motorized mirrors were installed.  Many of the triangles were inscribed with messages of a certain theme changing yearly, such as "Hope for Fellowship", "Hope for Wisdom", "Hope for Unity", "Hope for Courage", "Hope for Healing", and "Hope for Abundance". For 2002, the ball's crystals were engraved with the names of nations and organizations that were affected by the September 11 attacks.

In honor of the ball drop's centennial anniversary, a brand new fifth design debuted for New Year's Eve 2008. Once again manufactured by Waterford Crystal with a diameter of 6 feet (1.8 m), but weighing 1,212 pounds (550 kg), it used LED lamps provided by Philips (which can produce 16,777,216 or 224 colors), with computerized lighting patterns developed by the New York City-based lighting firm Focus Lighting. The ball featured 9,567 energy-efficient bulbs that consumed the same amount of electricity as only 10 toasters. The 2008 ball was only used once, and was placed on display at Times Square Visitors Center following the event. For 2009, a larger version of the fifth ball was introduced. The updated ball is an icosahedral geodesic sphere lit by 32,256 LED lamps. At 12 feet (3.7 m) in diameter, containing 2,688 Waterford Crystal panels, with a weight of 11,875 pounds (5,386 kg), it is twice as large as the 2008 ball. It was also designed to be weatherproof, as the ball is now displayed atop One Times Square year-round following the celebrations.

Yearly themes for the ball's crystal panels continued; from 2008 to 2013, the ball contained crystal patterns that were part of a Waterford series known as "World of Celebration", including themes such as "Let There Be Light" and "Let There Be Peace". For 2014, all the ball's panels were replaced with new "Gift of Imagination" designs, which will begin a new theme series known as "Greatest Gifts