Tullaun Castle now has one room up and running: airbnb link read more on it's preservation journey from the below article in 2013.

In Love, Again, with an Irish Historic Home: Sonja Bergin

Preservationist and Aussie native Sonja Bergin is a senior medical scientist at a Dublin-based laboratory, originally from East St. Kilda, a suburb of Melbourne, Australia. She and her husband, Kevin, live in Monasterboice, near Drogheda, County Louth, in an 18th century thatched farmhouse that they restored. She met Kevin, a Dublin native, on a scuba-diving holiday in Queensland, Australia. Period Living Magazine designated the restoration as its ‘Best Period Renovation’ in 2011.

This experience fueled their interest in the inherently native architecture of Ireland and more recently the tower houses of the 15th and 16th centuries. Since 2003, their increased interest in these houses led them on countless journeys in search of these ancient ruins, with a view to finding the ideal tower house ruin to restore. Last fall The Wild Geese  corresponded with Bergin through e-mail, discussing the couple's journey of ownership and restoration of Tullaun Castle, located in Lisquillibeen, Coolbaun, County Tipperary ( all photos here courtesy of Sonja Bergin).

The Wild Geese:  What was the catalyst for embarkation on this journey of conservation? Sonja Bergin (left): Love for old buildings. We live in a vernacular, thatched farmhouse, which we had restored, but wanted to move to a more rural location. We didn't think we'd ever find another property as interesting until we saw another castle for sale, which we made an unsuccessful bid on, and that set us on our search. After about three years of searching, we found Tullaun Castle, which was not for sale, and it took about another 9 months or so to firstly convince the owners to sell it to us and then to do all the things that were needed to agree on, what land came with it, price and then the securing of a mortgage.

The Wild Geese:  Tullaun Castle is one of the few remaining tower houses of the O’Kennedy Clan.  Can you tell us a little about the history of the Clan?

Bergin:  The O'Kennedy clan was descended from Cinneide (Kennedy), the nephew of Brian Boru.  The O'Kennedy sept consisted of three branches -- Dunn (brown), Fionn (fair) and Ruadh (red). Tullaun Castle was owned by members of O'Kennedy Fionn. The three branches of the O'Kennedys are shown as three helmets on the coat of arms. It is thought that the name is derived from "helmet-headed," "rough-headed" or "ugly-headed."  When President John F. Kennedy was presented with a specially commissioned coat of arms on his visit to Ireland in 1963, the "helmet-headed" interpretation was chosen.

The Wild Geese:  There is something very romantic in the notion of owning a castle.  What are the reactions when you tell people of your ownership? Bergin:  Some people think we're mad, and others think it's brilliant. When people visit [Tullaun] for the first time, they're usually impressed. Its exterior is quite simple, but when they see the interior, especially the top two floors, they usually realize what an amazing building it is.

The Wild Geese:  Tullaun Castle has a murder hole.  Can you explain this feature and perhaps a few more of the attributes of the castle?

Bergin:  The murder hole is a defense.  It is said that burning oil, boiling water, large rocks, et cetera, would be rained down through the murder hole. Our murder hole is in perfect condition. Other attributes -- above the murder hole there is recessed stonework square where the timber cover must have rested. The castle also has most of the cut stone around the windows and doors intact. It has numerous "hanging eyes" (medieval stone hinges for the doors and windows). 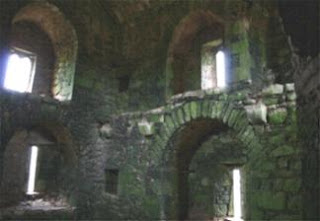 The top two floors are very bright and have lovely views. There is a lovely vaulted hall on the third floor, where the ceiling rises to about 18 feet. The castle has two garderobes, and, in the top one, it still has part of the stone slab that made up part of the original toilet seat. There are recesses next to the seats for the "toilet paper" to be stored.

One of the things I love about Tullaun is that it's a little bit wonky, and not because of structural faults. Some of the windows are not centered as you would expect, and there are other little idiosyncrasies that don't really make any sense.  Stonemasons' marks are still visible on some of the cut stonework. The beautifully crafted spiral staircase is still intact and in great condition. Another attribute is its wonderful location -- surrounded by woods, forestry and rolling green fields and a pretty crystal clear stream. On a clear night the stars are amazing, and I’ve seen some fantastic sun and moonrises. The Wild Geese:  Tell me about your work to date on Tullaun Castle (above) and some of your future plans for this monumental task.

Bergin:  Our work to date has been very limited due to lack of funds. We have repaired the existing lane to the castle, but there is no road at all to the castle for about the last 300 meters [328 yards] so this still needs to be done. We have been granted planning permission to restore the castle. In November 2009, we put in temporary floors which meant we could finally access all the rooms instead of just looking at them from the spiral staircase. The other thing we have done is put plastic sheeting on the top floor to help reduce the amount of rainwater that enters the castle through the vault.

The Wild Geese:  What have you found most frustrating and rewarding in the task to date? Bergin:  The most frustrating -- the current economic situation in Ireland means we cannot do very much at the moment. As it is a recorded monument, the planning process is slow and expensive. Although the castle is a recorded monument, which means stringent planning rules with added expense, it has not been designated 'protected structure' status. The castle is therefore essentially not eligible for any grants toward its maintenance or restoration. The most rewarding parts have included meeting a lot of interesting, like-minded people who have restored or are restoring a castle. Tullaun Castle is in the most wonderful location. It is essentially land-locked, with no passing traffic, and it feels like you really are in your own little world. Its close location to Lough Derg means we have lots of wildlife activity. It is a lovely place to spend time just relaxing and getting back to nature, and no day is ever the same.

The Wild Geese:  Is there anything you would like to add?

Bergin:  Our plan is to do the restoration as simply as possible. If something doesn't need to be repaired or tidied up we won't. We want it to still feel as if the building is nearly 500 years old. The exterior will have an external white-lime render like that in Grantstown Castle [in Kilfeacle, County Tipperary], which should prevent moisture from entering the structure. We feel honored to be the keepers of such a special building, and I hope one day we can restore it back to its former glory.