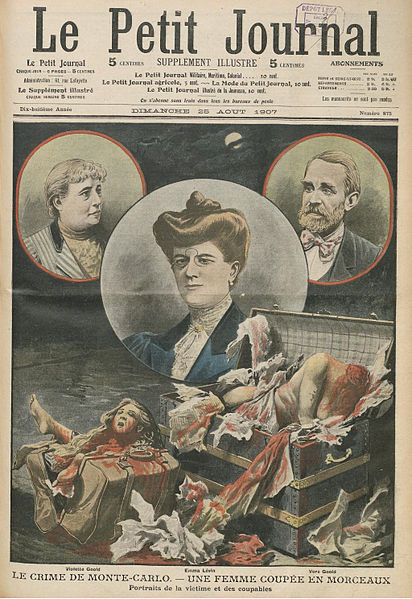 Vere Thomas "St. Leger" Goold was born 2 October 1853 in Clonmel, County Tipperary.  He rose to become the first Irish Tennis champion at the age of 25, but his stardom was fleeting and he descended into an alcohol-filled lifestyle.

He met the most charming Miss Marie Giraudin in a dressmakers shop in London.  He fell for her wiles and they were soon married.   She had expensive tastes and while he was from a prominent family, he did not have a great fortune.  They were soon weighed down with debt.

They moved to Montreal, Canada in 1897 to run a laundry.  In 1907, using the titles of "Sir" Vere and "Lady" Goold, the headed off to Monte Carlo to try their luck at the casino as Marie was convinced that she had a surefire method for winning. They were soon to find themselves in a financial bind.  Marie befriended a wealthy Swedish woman, Emma Levin, at the Casino.  Madame Castellazi was also a ‘hanger on’ and Marie soon came to blows with her in the Casino in a public outburst.  Social columns at Monte Carlo picked up the story, and Madame Levin decided she had to leave the city due to the publicity.

It is thought that the St Legers borrowed 40 pounds from Madame Levin and when she wanted repayment Marie hatched the plot to murder and rob her of cash and jewelry.  A large trunk was later found at the railway station at Marseille which belonged to the St Legers and when opened it contained the bloody body of Madame Levin.  Vere confessed to the murder in hopes of relieving his beloved Marie of guilt but her character was revealed during the course of the trial and both were found guilty.

Note: I have seen Marie referred to as Violette in newspaper articles of that era.